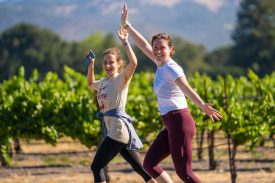 Sonoma, California /ENDURANCE SPORTSWIRE/ – Sonoma County is blessed with more than 425 wineries, and on a sun-kissed Sunday morning, thousands of runners scampered past many of them for the 18th Napa to Sonoma Wine Country Half Marathon.

No one was faster than the Reno, Nev., husband-wife tandem of Dominic and Amanda Henriques. Dominic hit the finish line in 1 hour, 9 minutes, 23 seconds. He didn’t have to hang around at the finish line long to watch Amanda win the women’s race in 1:27:12.

Afterwards, Amanda, who leans toward reds, couldn’t wait to head to the wine festival where 25 local wineries offered samples to sip.

Amanda, 35, ran track and cross country at the University of Reno. Dominic, 35, was a cross-country skier. After they married, she coaxed him into running and obviously he’s got more than a little talent.

“He’s been training so hard,” said Amanda. “So every time he wins, I’m super happy for him.”

Regarding his wife hitting the tape, Dominic said, “Definitely a proud moment. Not surprised, but definitely impressed.”

Amanda and Dominic both raved about the beautiful setting, the hills and the race atmosphere.

“It was beautiful,” said Amanda. “The rolling course was super fun. You kind of get tired on the up but you get to roll on the down.”

“It’s a beautiful place to run,” said Dominic. “I think it’s great training. Not every race is your big peak race of the season. Some of them have to be sharpening and getting stronger. This is a make-you-tough kind of race. I know I’ll be better for having run it. I recommend it to a lot of people.”

Christian Aldana, 26, of San Francisco finished second in the men’s race, more than four minutes back of Henriques, in 1:13:52.

“Hats off to (Henriques),” said Aldana. “He got a good pace out. I tried to go with him as long as I could. But those hills get you, no doubt about it.”

Including Saturday’s Napa to Sonoma Wine Country Rose’ 5K, more than 4,000 runners took part in the weekend. Forty-five states and 12 countries were represented. Because of pandemic protocols, the race was held in its traditional summer setting for the first time since 2019.

Between the picture-perfect weather conditions, the scenery, the wineries and the vino to sip after the race, Siqueiros could not have praised the race more profusely.

“You’ve got nice hills at the beginning to get your legs going and your lungs going,” said the men’s third-place finisher. “Obviously, it’s well organized. It’s a fun environment. It’s nice to see races open up again.

“The weather’s nice, so when you finish you get to chill out and have some wine and hang around in beautiful Sonoma.”

One of the most scenic half marathons in the world, runners enjoyed a fast and scenic course starting under a hot air balloon at Cuvaison Estate Winery and finishing in historic Sonoma Plaza. Race weekend kicked off on Saturday with the Rose 5k in downtown Sonoma Plaza. The world-renowned Napa and Sonoma Valleys serve as the host of the event, offering the finest in wine country ambiance and hospitality.

The 19th annual Napa to Sonoma Wine County Half Marathon and Rose 5k returns July 15-16, 2023. Runners can take advantage of a special pre-sale registration offer when they register online at runnapatosonoma.com.