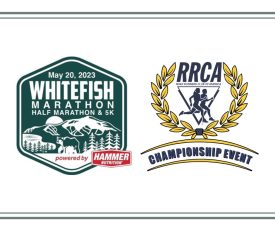 WHITEFISH, Mont. (Dec. 20, 2022) /ENDURANCE SPORTSWIRE/ – Runners at the 2023 Whitefish Marathon Powered by Hammer will be competing for records on an updated course, while vying for an extra championship medal thanks to the Road Runners Club of America (RRCA). The 16th annual event in Whitefish, Mont. on Saturday, May 20 was named the RRCA Marathon State Championship race, providing extra incentives and opportunities for community runners.

Held in the shadows of Glacier National Park, the full marathon has historically been known as a hilly course with more than 1,100 feet of elevation change. A four-mile course change between miles 13 and 26 of the marathon will reduce the overall elevation change while providing scenic views of Whitefish Lake. The updated marathon course has been certified by USATF, an industry standard in producing accurately measured race distances.

The Whitefish Marathon, owned by the nonprofit The Wave Aquatic and Fitness Center and currently managed by CRRG Events, began as a trail marathon in 2008. Originally named the Two Bear Marathon, the event has gone through significant updates since 2017. In addition to a rebrand and date shift from September to May, the race now includes a full marathon, half marathon and 5K. The Whitefish Marathon has become a ‘runcation’ destination, attracting participants from more than 40 states. Proceeds from the event benefit The Wave’s Membership Assistance Fund, for those in financial need, and the School to Pool Swim Program.

“We’ve really enjoyed the success and excitement surrounding the Whitefish Marathon, and we have our participants in mind first and foremost when we consider these changes,” said Art Krueger, general manager of The Wave. “It’s all about enhancing their experience from start to finish. We know participants come to run Whitefish for the views. Now they can come to PR and BQ as well! Holding the RRCA State Championship at Whitefish adds an extra level of prestige to the event, and I think the added competition could bring us some new records too.”

There are no course changes planned for the half marathon and 5K races held in conjunction with the Whitefish Marathon.