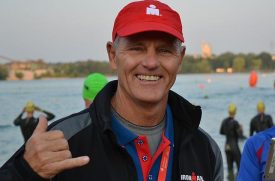 September 29, 2020 – Organizers of the Mind Body Tri, a first-of-its-kind virtual event designed to exercise the body and calm the mind, today announced that Mike Reilly, the official “Voice of IRONMAN,” will be the announcer of its inaugural event on October 24, 2020.

Unlike a traditional triathlon, the three legs of the Mind Body Tri are a 45 minute live online yoga class, a 5K run (or walk), followed by a 15 minute guided meditation. The Mind Body Tri will be the first live event Reilly has announced since the pandemic forced the cancellation of thousands of endurance races around the world. Participants will have the unique opportunity to hear him give words of encouragement, and possibly even hear their name called out.

Reilly has done on-site announcing and television coverage for over a thousand triathlon and running events in over 10 countries. Additionally, he has called over 190 IRONMAN races around the world, including the past 30 IRONMAN World Championships, and his iconic call of “You are an IRONMAN!” has been heard by over 350,000 finishers.

“This is a once in a lifetime opportunity for many people to participate in an event that Mike Reilly is announcing,” said Eva Solomon, owner of Epic Races and one of the organizers of the Mind Body Tri. “He is unequivocally the best-of-the-best when it comes to race announcers in our industry, and we are ecstatic that he has agreed to sign on as emcee of the Mind Body Tri.”

“It doesn’t matter if you are an IRONMAN world champion or a casual runner, everyone should be taking steps to improve their physical and mental health,” said Mike Reilly. “Encouraging people and celebrating their hard-earned accomplishments has been one of the greatest rewards in my life as an announcer. I’m excited to announce the Mind Body Tri and hope we can inspire people to take on even greater challenges.”

As an added special bonus, participants can receive a personalized message written by Reilly when they purchase the book MIKE REILLY: Finding My Voice during registration for the Mind Body Tri. MIKE REILLY: Finding My Voice is a series of deeply personal vignettes illuminating how profoundly the sport of IRONMAN touches both its participants and its fans. Reilly’s riveting stories will have readers re-thinking their notions of what people are capable of when pushed to their limits.

The Mind Body Tri was inspired by a group of successful race directors and colleagues looking for a way to come together to support one another and others by launching a unique, non-competitive, virtual fitness event designed to increase well-being and happiness. Organizers include Bruce Dunn, All Sports Productions; Joe Fleenor, Above The Fold Events & Sport Promotions; Rachel Martin, Forward Motion Events; Eva Solomon, Epic Races; Mark Walter, Sun Multisport Events and Tina Wilmott, Endurance Sportswire. www.mindbodytri.com

In addition to being the official “Voice of IRONMAN” worldwide, Mike Reilly has done on-site announcing and television coverage for over a thousand other triathlon and running events in over 10 countries. He has called 193 IRONMAN races around the world, including the past 30 years as announcer of the IRONMAN World Championship in Kailua-Kona, Hawaii. His iconic call of “You are an IRONMAN!” has been heard by over 350,000 finishers. Reilly is a member of the IRONMAN Hall of Fame, the USA Triathlon Hall of Fame and the Running USA Hall of Champions, and is the only person to have been inducted into all three. He is also the author of the book MIKE REILLY: Finding My Voice, a series of deeply personal vignettes illuminating how profoundly the sport of IRONMAN touches both its participants and its fans. www.mikereilly.net/