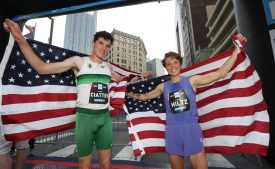 PITTSBURGH /ENDURANCE SPORTSWIRE/ – At the 11th Fleet Feet Liberty Mile on Friday evening in downtown Pittsburgh, the pro races ended in two thrilling finishes as Vincent Ciattei, of Eugene, OR and Nikki Hiltz, of, Flagstaff, AZ put on closing bursts to edge their respective fields, clocking 4 minutes, 4 seconds and 4:28, respectively.

More than 1,300 participated in the 11th annual family-friendly “pop-up” running event. After crossing the finish line, runners stayed to cheer on the athletes in the Pro Miles presented by Fleet Feet Pittsburgh, and the fun continued at the official after party at The Yard with a complimentary I.C. Light, courtesy of Pittsburgh Brewing Company for participants 21 and over.

Daniel Michalski, Clayton Murphy, Willy Fink and Waleed Suliman took an early lead in the Men’s Pro Mile. As the pack made the turn onto Liberty Avenue, Ben Blakenship made his move and surged to take the lead. Vincent Ciattei stayed close behind. Ciattei was able to make the final burst to break the finish line tape for the second year in a row. Blakenship finished second in 4:04 and Kasey Knevelbaard finished third in 4:04.

“I just wanted to stay in front and respond to the moves that other people made, and I was able to do that and stay in control the whole time,” Ciattei said. “I felt strong here at the end, and I felt it could take me all the way to finish. I had some space to celebrate my second win in a row.”

The pro women went out pretty hard in the first half with Heather MacLean, Nikki Hiltz, and Allie Wilson leading the pack. Emily Lipari made a move at the halfway point with Heather MacLean right behind. The group rebunched at the final approach, but Hiltz pushed past to break the tape in 4:28. Lipari finished second in 4:28, and MacLean finished third in 4:31. Both Ciattei and Hiltz earned $5,000 as the 2022 Fleet Feet Liberty Mile champions.

“It was so loud in the chute that I couldn’t even hear any footsteps, but I know there are some kickers in this race,” Hiltz said.

Liam Harvey, 18, of New York City and Elisabeth Franczyk, 16, of Washington, Pa. were the champions of the first-ever 4RUN2 heat, which gave competitive runners ages 14-19 an opportunity to compete in a heat of their own. They finished in 4:36 and 5:48, respectively.

The Fleet Feet Liberty Mile, downtown Pittsburgh’s only evening road race, has been repeatedly named “one of America’s most iconic races” by Runner’s World. The event showcased a variety of fitness levels, from first-time runners to some of America’s fastest athletes, including U.S. Olympians. The Fleet Feet Liberty Mile Elite Running Derby returned for the second year in a row, and all participants, including Virtual Heat runners, were randomly assigned one of the participating elites. Runners who were assigned Pro Heat champions Ciattei or Hiltz this year received a Brooks Running hat as a prize.

The Fleet Feet Liberty MIle is the second of three events participants need to complete to earn their #RUNwithP3R Challenge medal; the first was any Sunday event during the 2022 DICK’S Sporting Goods Pittsburgh Marathon Weekend of Events, and the final is the 2022 EQT Pittsburgh 10 Miler on Nov. 6.

For complete results and more, go to: LibertyMile.org