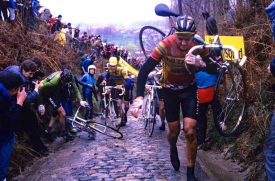 We're bringing Flanders to the States during the weekend of the 2022 Tour of Flanders!

/ENDURANCE SPORTSWIRE/ – “Following the cancellation of our European Spring Classic trips for this year due to the pandemic, I had the idea of bringing “Flanders” here to the United States,” says Brian Rounds, the long-time International Director at Velo Echappe’. “Along with the backing and assistance of VisitFlanders in NYC, we have created our “Flanders in New York” cycling weekend in upstate New York that will be held from March 30 – April 3rd. Each day, we are going to feature live virtual visits from Flanders. For example, our guests can look forward to a private meeting with the “Lion of Flanders,” Johan Museeuw (three-time champion of De Ronde), as well as guided, curated visits to two of the most famous cycling museums in the world, the Tour of Flanders Museum in Oudenaarde and the Koers Cycling Museum in Roeselare. After our daily virtual visits to Flanders, we are going to explore the roads of the Hudson River Valley and the nearby Litchfield Hills of western Connecticut, where we will visit some of the most picturesque towns in the region as well as discover some of its finest restaurants.”

Marco Frank, the Trade and Partnerships Manager for North America at VisitFlanders, continues: “Of course, some of the highlights of any trip to Flanders are the beer, chocolates, and waffles! During our Flanders weekend in New York, we are going to sample some of the Belgian beers and chocolates that are loved around the world, enjoy a Flandrien Raffle, and watch the live stream of the 2022 Tour of Flanders while enjoying our “Belgian Waffle Brunch” at Troutbeck. I can’t wait!”

When it came to selecting a host property for the “Flanders Weekend,” Rounds knew immediately where he wanted to go. “Troutbeck in upstate New York is a real jewel and is the ideal place to host this trip. It’s only two hours from New York City and three hours from Boston. In addition to its comfortable rooms and ambiance, Troutbeck has served as an enchanting private estate, country inn and tavern since 1765 and has, for centuries, been a favored retreat of distinguished guests important in the arts, letters, matters of policy, and social justice. For example, during the time of the estate’s first owners, the Benton Family, it was a frequent host to such writers as Mark Twain, Henry David Thoreau, Ralph Waldo Emerson, and the naturalist, John Burroughs. It gives us the chance to combine two worlds with rich histories for a weekend at an unforgettable destination.”

VELO ECHAPPE’ INTERNATIONAL SPORTS: Velo Echappe’ International Sports has been creating award-winning active vacations for the past 25 years, most notably to the Spring Classics, the Giro d’Italia, and the Tour de France. In addition, they pioneered the concept of hosting full-time the greatest legends of cycling, triathlon and running on their vacation programs while also working alongside the industry leaders on the largest international promotions for the Tour de France and the Tour of Flanders.

VISITFLANDERS: “VISITFLANDERS is the tourist office for Flanders, Belgium. Located in the north of Belgium, Flanders manages to surprise visitors with a huge range of opportunities for culture, gastronomy, art, heritage, and cycling. Flanders encompasses the Art Cities of Brussels, Bruges, Antwerp, Ghent, Leuven and Mechelen.”

View all Releases by Brian