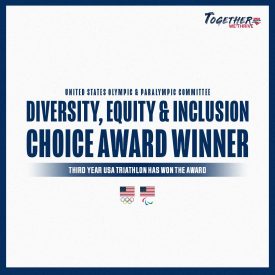 INCLUSION AWARD USA Triathlon has been honored with the DE&I Choice Award more than any National Governing Body in the Olympic and Paralympic Movement.

COLORADO SPRINGS, Colo. /ENDURANCE SPORTSWIRE/ – The United States Olympic & Paralympic Committee today announced USA Triathlon’s Together, We Thrive initiative as the recipient of its annual Diversity, Equity & Inclusion Choice Award, the fourth time the organization has been honored by the USOPC for its diversity and inclusion efforts since 2017.

Awarded since 2015, the DE&I Choice Award recognizes a National Governing Body (NGB) or High Performance Management Organization (HPMO) for the creation of a single diversity, equity and inclusion best practice or a series of diversity, equity and inclusion best practices. After an internal USOPC selection committee narrows down the submissions, finalists are put to a vote of representatives from NGBs and HPMOs across the U.S. Olympic and Paralympic Movement.

USA Triathlon’s Together, We Thrive program received the highest number of votes, and the organization was honored at a celebratory dinner as part of the 2021 U.S. National Governing Bodies Council meeting in Colorado Springs, Colorado. This is the third time USA Triathlon has been honored by the USOPC with the D&I Choice Award; the organization also earned the award in 2018 and 2019.

Launched in August 2020 with the goal of integrating diversity, equity, inclusion and access into all areas of USA Triathlon’s business and community, the Together, We Thrive initiative is centered around four principles that serve as guideposts for future decision-making and programming at USA Triathlon: Inclusivity Starts with Us, A Community Focus, Accessibility & Impact, and Representation Matters. The Together, We Thrive initiative involved the formation of a Diversity, Equity, Inclusion and Access (DEIA) Advisory Council, consistent DEIA messaging sent to all constituent groups, the launch of the Sport is a Human Right campaign, roundtable discussions, accessible grassroots programs to grow the sport, scholarship opportunities and on-site activations at USA Triathlon National Championship events.

Among the highlights of the Together, We Thrive initiative include:

“At USA Triathlon, we are dedicated to combating discrimination, challenging inequalities and championing social justice in the multisport community and throughout the endurance sports industry,” said Megan Ritch, USA Triathlon Manager of Diversity, Equity, Inclusion and Access. “Diversity, Equity, Inclusion and Access is a guiding principle in USA Triathlon’s Strategic Plan, and through our Together, We Thrive initiative, we have reached hundreds of thousands of athletes, coaches, club leaders and race directors through on-site activations at our National Championships, our inaugural Actions for Change Summit and consistent communication and promotion across all our digital channels. This is just the beginning as we continue to build a future for the sport that all people can see themselves being a part of.”

USA Triathlon’s second annual Together, We Thrive: Actions for Change Diversity, Equity, Inclusion and Access Summitis scheduled for Nov. 5-7. The free virtual summit will explore topics related to diversity, equity, inclusion and access in multisport — with a focus on presenting actionable ideas that athletes, club leaders, coaches, race directors and other multisport enthusiasts can implement at the local level to create change. Registration for the free event is open and can be found here.

USA Triathlon’s three DE&I Choice Awards and four total DE&I awards are the most of any NGB or HPMO in the Olympic and Paralympic Movement.

In 2017, USA Triathlon was honored by the USOPC with its Advancing D&I Award as the NGB or HPMO with the highest annual growth percentage of underrepresented individuals based on diversity data for women and ethnic and racial minorities.

In 2018, USA Triathlon received the D&I Choice Award for its Paratriathlon Military Engagement Program, as the USOPC community celebrated USA Triathlon’s efforts to introduce injured veterans to the sport of paratriathlon as an avenue for a healthy and active lifestyle, providing appropriate opportunities for all participants, from those simply learning the skills to swim, bike and run safely for recreation to those who wish to represent the U.S. in elite paratriathlon competition.

In 2019, USA Triathlon’s Historically Black Colleges and Universities (HBCU) Engagement Program was honored with the D&I Choice Award by the USOPC. Intended to provide a pathway to the sport of triathlon in an underrepresented population, the HBCU Engagement Program aims to lower the barriers to entry for people of color to participate in the sport by providing access, education, resources and opportunities through partnerships with these institutions.

USA Triathlon is proud to serve as the National Governing Body for triathlon, as well as duathlon, aquathlon, aquabike, winter triathlon, off-road triathlon, paratriathlon, and indoor and virtual multisport events in the United States. Founded in 1982, USA Triathlon sanctions more than 4,000 events and connects with more than 400,000 members each year, making it the largest multisport organization in the world. In addition to its work at the grassroots level with athletes, coaches, and race directors — as well as the USA Triathlon Foundation — USA Triathlon provides leadership and support to elite athletes competing at international events, including World Triathlon Championships, Pan American Games and the Olympic and Paralympic Games. USA Triathlon is a proud member of World Triathlon and the United States Olympic & Paralympic Committee (USOPC).

The most physically active cities in the U.S.