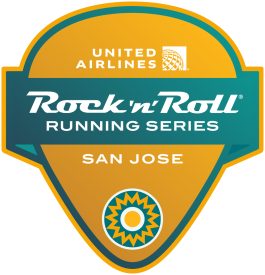 Using his victory today, Kent has launched himself to the top of the male leaderboard in the Rock ‘n’ Roll EliteTM half marathon series and has staked his claim as the man to beat as the series enters the home stretch.

“Feels pretty phenomenal to win. I’m pretty psyched,” said Kent. “It was such a close finish and the race is kind of a blur right now. I loved the course. It’s my first time ever in San Jose and it is such a cool way to see the area and have a unique experience in the city.”

Having grown up in San Jose, Bergman made a return to her hometown and was rewarded with a victory.

“It was tough and I had to hold on the last few miles. I feel like I just barely won, but it was really fun,” said Bergman. “This is my second time running this race and it is always just so fun and energetic. The start and the finish are just so high energy.”

In the men’s half marathon, Filmon Ande, 24, of Eritrea followed very closely behind in second with a time of 1:02:51 while Dominic Korir, 29, of Kenya was hot on the tail of the top two and rounded out the podium in third with a time of 1:03:02.

In the women’s half marathon, Maya Weigel, 27, of Los Altos, Calif. crossed the finish line in second with a time of 1:12:55 and Jane Bareikis, 28, of Crestwood, Ill. came in close behind and completed the podium in third with a time of 1:13:09.

With her third-place finish, Bareikis was able to extend her lead atop the female leaderboard for the Rock ‘n’ Roll Elite half marathon series.

The United Airlines Rock ‘n’ Roll Running Series San Jose featured one of the most competitive elite fields to date for the Rock ‘n’ Roll Elite™ half marathon series, which launched in February and aims to offer world-class runners the opportunity to showcase their talents and profile on a consistent series wide scale. Elite runners from around the world competed for a share of the $10,000 prize purse as well as points toward the Elite Beat Rankings (EBR), earning the opportunity to compete for the bonus pool in the grand finale at the 2023 Rock ‘n’ Roll Running Series Las Vegas.

Bringing Fun to the Run® in San Jose, the United Airlines Rock ‘n’ Roll Running Series San Jose was more than just elite runners as it invited all participants to take in a gorgeous foot tour with live music and entertainment along the route. Runners and walkers received a running tour of Santa Clara Valley that started on Market Street, ran past the SAP Center, through the Rose Garden District and highlighted downtown San Jose before finishing at the Plaza de Cesar Chavez Park, where they were greeted by family, friends, and spectators before joining the crowd to enjoy the sounds of Wonder Bread 5 taking the stage as the Encore Entertainment.

The IRONMAN Group operates a global portfolio of events that includes the IRONMAN® Triathlon Series, the IRONMAN® 70.3® Triathlon Series, the IRONMAN® Virtual Racing™ (VR™) Series, 5150™ Triathlon Series, the Rock ‘n’ Roll® Running Series, the Rock ‘n’ Roll Virtual Running™ Series, IRONKIDS®, World Triathlon Championship Series, premier running events including the Standard Chartered Singapore Marathon™ and City2Surf®, UTMB® World Series events including Tarawera Ultra and Ultra-Trail Australia™, Epic Series™ mountain bike races including the Absa Cape Epic®, road cycling events including Haute Route®, and other multisport races. The IRONMAN Group is the largest operator of mass participation sports in the world and provides more than a million participants annually the benefits of endurance sports through the company’s vast offerings. Catering to the full athlete experience, the company portfolio also includes FulGaz, the most realistic indoor riding experience connected fitness application aimed at preparing athletes for real-world events. Since the inception of the iconic IRONMAN® brand and its first event in 1978, athletes have proven that ANYTHING IS POSSIBLE® by crossing finish lines around the world. Beginning as a single race, The IRONMAN Group has grown to become a global sensation with hundreds of events across 55+ countries. The IRONMAN Group is owned by Advance, a private, family-owned business. For more information, visit www.ironman.com/about-ironman-group.