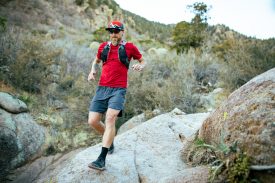 /ENDURANCE SPORTSWIRE/ – St. George, Utah – UltrAspire has been introducing concepts to drive the running industry forward since the company’s inception in 2012. Owner and founder, Bryce Thatcher, known as the “Father of Hydration” has designed hundreds of products over his 35-year career that have shaped the evolution of hydration carry options to the present day.

Jeff Browning (aka Bronco Billy) is a veteran ultra runner and endurance coach. He has competed in some of the world’s hardest and most competitive ultra mountain races over the past two decades, including Western States 100, Ultra Fiord in Patagonia Chile, Europe’s Ultra Trail du Mont Blanc, and Ultra Trail Mount Fuji in Japan. He’s also a 5-time finisher and 2018 champion of the wild and tough Hardrock 100 in SW Colorado.

Throughout the development of the Bronco race vest, Bryce and Jeff collaborated thoroughly through multiple iterations ensuring every aspect of the vest was considered from stitching pattern to pocket access. Jeff won multiple 100-mile races in prototype iterations and even secured a 2xR2R2R FKT in his sample Bronco race vest. This type of testing helped to prove the concept and design before the vest was ever introduced to the public.

“Jeff is very particular about his gear organization and setup. This process was enjoyable for me as it required a bit of out of the box thinking. I think when you try the vest on and take it for a run you’ll notice some creature comforts and logical placements that just make sense. That intuitiveness was dialed in through heavy testing and refinement.” – Bryce Thatcher said.

“Bryce and I have known each other for a long time. He is a creative person, I am a creative person being a former graphic designer. When we put our heads together we get sketches out and ideas and we really geek out on materials and features.” Jeff Browning said of working with Bryce. “The objective of this vest was a lightweight 5 liter pack that had enough capacity to carry a small mountain kit, but never have to take it off to get to anything.” Browning said.

The Bronco Race Vest is now available for preorder on the UltrAspire website and is set to launch on July 10th, 2022.