U.S. Olympians to Test Their Speed in Pittsburgh at 2022 UPMC Health Plan Pittsburgh Half Marathon 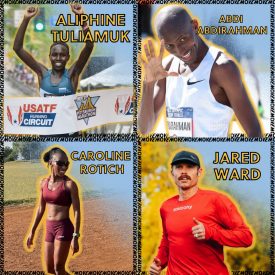 U.S. Olympians Aliphine Tuliamuk, Jared Ward and Abdi Abdirahman have special connection to the City of Champions; this year’s 13.1-mile race features a prize purse of $58,000

PITTSBURGH, PA (April 21, 2022) /ENDURANCE SPORTSWIRE/ –U.S. Olympic marathoners Aliphine Tuliamuk, Jared Ward and Abdi Abdirahman are ready to race the streets of Pittsburgh in the UPMC Health Plan Pittsburgh Half Marathon, scheduled for Sunday, May 1. Each of the members of this talented trio have a special connection to the City of the Champions and will embrace the city’s renowned sports fans and spectators to help them shine on race day.

Ward and Abdirahman lead a talented field of top international and American runners who will be competing for the $10,000 top prize. Abdirahman, who is a 5-time Olympian, has never been to Pittsburgh but is a big fan of the city.

“It has been a dream of mine to race in Pittsburgh,” Abdirahman said. “It will be my first time in the city, and I am a big Steelers fan. I am looking forward to running the Pittsburgh Half Marathon. Training has been going great leading to this race, and I am excited to test my fitness.”

Ward will finally make his Pittsburgh racing debut after planning to run in 2020 and 2021 before the in-person events were canceled both years. He is excited to return to the city, which he hasn’t visited since he spent two years on Mormon mission after high school.

“I’m beyond excited to return to Pittsburgh,” Ward said. “I feel like I grew up here, while serving a mission for the Church of Jesus Christ of Latter-day Saints. I look forward to seeing friends and touring around ‘dahntahn’ – this time on the streets as a runner.”

Joining Abdirahman and Ward in the men’s race is James Ngandu of Kenya, who earlier this year won the Houston Marathon, and American Lawi Lalang, an eight-time NCAA champion who holds a half-marathon personal best of 1:02:49. Wesley Kiptoo, who was the 2021 NCAA Indoor National Champion at 5,000 meters, will also make his half-marathon debut at the event. Local runners Colin Martin, who holds a personal record of 1:05:19, and Nick Wolk, who won the 2021 Richard S. Caliguiri City of Pittsburgh Great Race 5K and 10K, will also race.

Aliphine Tuliamuk is excited to return to Pittsburgh to run her first race since the Tokyo Olympics. In 2015, she ran her first marathon at the DICK’S Sporting Goods Pittsburgh Marathon, finishing in second in 2:34:44. She returned in 2018 to win the USA Half Marathon Championships.

“Pittsburgh has become a special city for me,” Tuliamuk said. “It’s where I learned that the marathon was painful but worth the struggle. Winning the 2018 USATF Half Marathon Championship gave me much needed confidence as I built toward the 2020 U.S. Olympic Trials.  This year I am hoping for the same competitive atmosphere that Pittsburgh always brings. It will be my first race in a while, and I wanted to come to a place where I feel comfortable.”

Her speed will be tested against Caroline Rotich, who won the 2015 Boston Marathon and has a half-marathon personal best of 1:08:53.

“This will be my first time coming to Pittsburgh,” Rotich said. “It’s always exciting to travel to new places and Pittsburgh has been on my bucket list.  I’m motivated to capitalize on my training this spring, rather than refocus on another marathon. I am feeling fit and ready to run fast in Pittsburgh.”

This year’s UPMC Health Plan Pittsburgh Half Marathon offers a prize of $58,000, including $10,000 each for the top men’s and women’s finishers. For the first time, the event has been awarded a World Athletics Road Race Label. Only five other U.S. races carry a label from World Athletics.

A virtual athlete Q&A with Ward, Abdirahman, Tuliamuk and Rotich will be held on Friday, April 29 at 9:00 a.m. EST. Media interested in attending should RSVP to kelsey.emch@p3r.org.