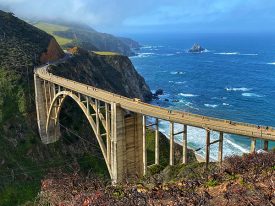 CARMEL, CA /ENDURANCE SPORTSWIRE/ – For the first time in three years, the Big Sur Marathon took place along Highway 1 from Big Sur to Carmel, CA on the last Sunday in April. Returning 2019 champion Jordan Tropf defended his title in 2:26:51 after quickly pulling away from the pack. Anne Flower, 32, from Covington, Kentucky, took the top women’s podium spot in 2:49:49 in her debut appearance at the Big Sur Marathon.

Tropf, 30, and an orthopedic surgeon at Walter Reed Medical Center in Bethesda, Maryland, just missed the record in the unique Boston 2 Big Sur division for those who ran the Boston Marathon six days ago. Tropf completed the challenge in a combined time of 4:51:32, only 16 seconds off the record.

“The course is just as beautiful as I remember, but the difference this year is that I knew what to expect and I was definitely more prepared for the course,” said Tropf. “The weather was totally perfect except for a little wind once we hit the coast.”

Flower, an ER doctor whose family enthusiastically greeted her at the finish line, noted that she’s been eyeing the race for years and was thrilled to finally make the trip out.

“I wasn’t completely sure whether I was in first or second, but I was just mostly just enjoying the gorgeous course and stunning views around every curve,” said Flower. “It was an amazing race and I’ll definitely be back to defend my title.”

The men’s elite field quickly spread out with local favorite Adam Roach sitting comfortably in second place until Jeffrey Stern, 35, of Mill Valley, CA, made a move at mile 23.

“It was fun to reel him in,” said Stern. “If he wasn’t wearing those bright orange shorts, I probably wouldn’t have pushed so hard to pass him. I was literally chasing the carrot in front of me.”

The women’s Boston 2 Big Sur record was broken by Thia Angelo, 33, from San Jose, Calif. Her combined time for the 5:59:11, the first time someone has broken six hours for the two races.

Runners were treated to partly sunny skies and temperatures in the low 60s as roughly 8,000 participants set out along California’s scenic Highway 1. Nearly 300 runners completed the marathon as part of the Boston 2 Big Sur Challenge, in which runners are ranked by combined times of both events.

Six different race distances – Marathon, Relay, 21-Miler, 11-Miler, 12K, and 5K – welcomed sold-out fields that included participants from all 50 states, D.C., and 34 countries. The Big Sur International Marathon is a “bucket list” race for runners of all ages and paces. The marathon is held every year on the last Sunday in April, and registration is determined by a series of random drawings that open beginning later in the summer. For more information and complete 2022 race results, visit bigsurmarathon.org.

About the Big Sur Marathon Foundation

The Big Sur Marathon Foundation is a nonprofit organization whose mission is to create beautiful running events that promote health and benefit the community. Under the brand are the Big Sur International Marathon in April and the Monterey Bay Half Marathon in November. Each year, the organization donates nearly $300,000 to local nonprofits via their grant program to community volunteer groups.

View all Releases by Michelle