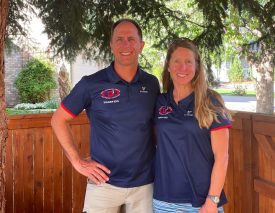 D3 owner and Heach Coach, Mike Ricci shared, “It is important for the D3 coaches to be passionate about the sport and possess the highest level of commitment for helping athletes reach their goals. Both Susan’s passion and commitment are unparalleled! Her wealth of knowledge makes our coaching team stronger and she will bring a unique perspective to our organization from racing at the highest levels of the sport.”

In 2004, Susan became the first U.S. triathlete to win an Olympic medal by taking the bronze in the Athens Olympics. Additionally, she was inducted into the USA Triathlon Hall of Fame in 2015 and was the USOC Athlete of the Year in June 2005. She has earned additional honors and awards throughout her racing career. She is deeply proud of her Olympic achievement and that success has shaped her coaching philosophy.

Her journey into coaching began while she was coaching herself at the beginning of her professional racing career. At that time, she realized that most of the athletes she was working with (including herself) had no problem pushing their limits and taking on everything that was dished out. But the challenge she found as a coach was to help those athletes understand that more is not always better. She feels very strongly about “work hard and rest hard” in order to bring out the best in each athlete. As a coach, she incorporates the rest needed into an athlete’s daily, weekly and monthly schedule to help them achieve a balance as they work toward their goals.

In joining D3, Susan shares, “I am so grateful for the opportunity to be a part of such an amazing team and coaching staff. I look forward to learning even more about triathlon coaching by working alongside Mike and the other great coaches at D3.”

“We are very excited to have her on our staff as we continue to lead the way with one-to-one coaching in triathlon and in helping athletes achieve their goals,” said Ricci.

Susan “absolutely loves helping athletes reach their goals and realizing that they can accomplish something that they never thought possible.” She will be coaching athletes through D3’s 1-to-1 coaching services. She enjoys working with athletes who never give up, have big goals no matter how fast they are, are moving from short course to long course races, and athletes who have time constraints and have to balance family and career with their triathlon goals.

View all Releases by Melanie Ricci

It doesn’t take a lot of exercise to fight depression, study says