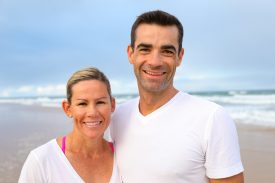 CAMBRIDGE, Mass.—Feb. 23, 2022 /ENDURANCE SPORTSWIRE/ – InsideTracker, the leading personalized performance and nutrition system, today announced a partnership with professional triathletes Tim O’Donnell and three-time IRONMAN World Champion, Mirinda “Rinny” Carfrae. The athletes are recognized as two of the world’s most successful and experienced long-course triathletes on their own merit, and, together, are an unstoppable duo in the sport, sharing hundreds of podium finishes while raising two young children.

In March, 2021, during a middle-distance triathlon in Miami, O’Donnell began experiencing severe chest pain during the bike leg. He went on to cross the finish line in 11th overall before discovering he had experienced one of the most-feared events in triathlon— a sudden cardiac event, colloquially known as a “widowmaker,” which is hallmarked by its sudden onset without prior symptoms and its dire, often fatal, consequences. These cardiac events cast a particularly ominous shadow over the sport of triathlon where, even among some of the fittest in the world, the incidence of fatal on-course heart attacks is about 1.7 per 100,000 participants, according to a study by the Cleveland Clinic.

O’Donnell later learned he carried a genetic predisposition for increased plaque and inflammation that created a perfect storm in his arteries, and, together with Carfrae, his wife and the mother of their two young children, considered whether a return to professional triathlon was worth the risk. However, triathlon was not just their life’s passion, it was also their profession, and, in October, 2021, O’Donnell was cleared by his medical team to return to training.

Carrying the knowledge of his genetic predisposition, both O’Donnell and Carfrae knew that lifestyle and nutrition, which had always been vital for optimizing performance as professional athletes, was now critical to preserving his wellness and healthspan long-term. In November, 2021, they discovered InsideTracker, a human optimization platform that uses regular blood biometric testing, combined with DNA insights and fitness tracker data, to create a personalized Action Plan of science-backed nutrition and lifestyle recommendations that helps athletes and other high-performing people optimize for strength, endurance and longevity.

“I know now that it’s crucial that I pay attention to my body, not just for my performance as a professional athlete, but also for my health and to be here for my family,” said O’Donnell.  “The data is only as good as your interpretation, and InsideTracker makes it easy for me to keep an eye on the things I know I need to watch due to my condition, while also staying in my optimized zones as a professional athlete.”

“If I can optimize what’s going on inside, then my day-to-day life is just going to be enhanced,” said Carfrae. “I love InsideTracker because it helps me live my life to the fullest.”

“The entire InsideTracker team is so inspired by Tim and Rinny’s story, since it exemplifies our mission as a company,” said Dr. Gil Blander, co-founder and chief scientific officer, InsideTracker. “We created InsideTracker primarily as a way to improve healthspan and help people live healthier, longer lives, and discovered athletes were drawn to the ability to optimize for performance using our science-backed Optimized Zones. Tim’s story is the perfect combination of both, and we can’t wait to cheer him on the road to Kona and beyond.”

Founded in 2009 by top scientists from acclaimed universities in the fields of aging, genetics and biology, InsideTracker is a truly personalized nutrition and performance system. InsideTracker’s mission is to help people add years to their lives and life to their years by optimizing their bodies from the inside out. By analyzing the body’s data from blood, DNA and fitness trackers, InsideTracker gives a crystal clear picture of what’s going on inside, along with a science-backed action plan for improving your health and becoming your best self. Read our peer-reviewed papers in Scientific Reports and Current Developments in Nutrition.

View all Releases by InsideTracker