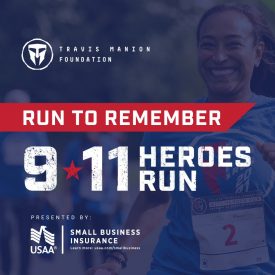 Held each September, the 9/11 Heroes Run serves to unite our nation to honor the nearly 3,000 lives lost on 9/11, as well as honor our veterans, military, and first responders who serve our country and communities. This year, more than 90 communities around the country will host 9/11 Heroes Runs with more than 60,000 people participating at both in-person and virtual events.

“USAA is honored to serve as the title sponsor of the 9/11 Heroes Run 5K Race Series, in addition to The USAA Foundation’s philanthropic support for programs that support military families of the fallen,” said Larry Williams, VP of USAA Small Business Insurance. “Families of those that we’ve lost need our collective support and the 5K race is one way that we can all participate and show that community our support.”

The 9/11 Heroes Run 5K series was inspired by Marine 1stLt Travis Manion, who was killed by an enemy sniper in Iraq in April 2007 as he selflessly pulled his wounded teammates to safety. Before his final deployment, Travis visited New York City Fire Department Rescue Company 1 – a group known for losing almost all their men on 9/11—and gained an even deeper devotion to defending the country’s freedom ahead of his return to Iraq. The 9/11 Heroes Run serves as a reminder for the nation to never forget the heroes of that day.

“Each year, the anniversary of the September 11th attacks provides us an opportunity to gather and reflect on the civilians and first responders we lost that day, and all of the lives we’ve lost in the wars since, including my brother,” said Ryan Manion, President, Travis Manion Foundation. “We are honored to have USAA as our title sponsor of the 9/11 Heroes Run Race Series. USAA shares our commitment to remember the fallen and honor them so that future generations don’t forget.”

Registration is now open for each 9/11 Heroes Run across the country at www.travismanion.org/heroesrun.

Travis Manion Foundation (TMF) unites communities to strengthen America’s national character by empowering veterans and families of fallen heroes to develop and lead future generations. In 2007, 1stLt Travis Manion (USMC) was killed in Iraq while saving his wounded teammates. Today, Travis’ legacy lives on in the words he spoke before leaving for his final deployment, “If Not Me, Then Who…” Guided by this mantra, veterans continue their service, develop strong relationships with their communities, and thrive in their post-military lives by serving as character role models to youth. As a result, communities prosper and the character of our nation’s heroes lives on in the next generation.

Founded in 1922 by a group of military officers, USAA is among the leading providers of insurance, banking, investment and retirement solutions to more than 13 million members of the U.S. military, veterans who have honorably served and their families. Headquartered in San Antonio, USAA has offices in eight U.S. cities and three overseas locations and employs more than 38,000 people worldwide. Each year, the company contributes to national and local nonprofits in support of military families and communities where employees live and work. For more information about USAA, follow us on Facebook or Twitter (@USAA), or visit usaa.com.