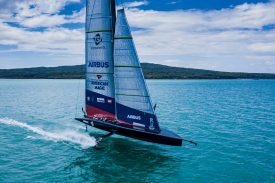 Endurance software leader adds to growing list of pro teams who choose TrainingPeaks to track, analyze and plan all aspects of training

Louisville, Colo., May 25, 2022 /ENDURANCE SPORTSWIRE/ – TrainingPeaks, a global leader in providing smart and effective digital training solutions for athletes and coaches of all levels, has added to its all-star list of partnerships with professional cycling teams.

French cycling team AG2R CITROËN TEAM and Kazakhstan-based Astana Qazaqstan Team join an impressive roster of road cycling teams with UCI WorldTeam status who trust TrainingPeaks as their go-to training platform in order to compete at the highest level. Both teams will compete in the Tour de France in July.

“We’re thrilled to add all of these teams to our growing roster of partners as well as another upstart U.S. women’s pro cycling team in EF Education-TIBCO-SVB,” said Dirk Friel, TrainingPeaks co-founder and Chief Evangelist. “These elite teams trust TrainingPeaks to help them perform at the highest level and compete on the world stage.”

U.S. sailing team New York Yacht Club American Magic joined TrainingPeaks’ pro team roster on March 31. The team aims to win the 37th America’s Cup, the highest prize in sailing and the oldest trophy in international sports. The inclusion of “cyclors,” which allows sailors to use their legs rather than arms to power the boat’s hydraulic systems, was reintroduced for the 2024 America’s Cup to be held in Barcelona, Spain.

“We’re proud to partner with American Magic as their training platform on their journey to win America’s Cup,” Friel said. “This partnership exemplifies TrainingPeaks’ commitment to diversity of sport, and we’re grateful that this elite sailing team trusts our tools to provide structured training.”

View all Releases by TrainingPeaks