The RunnerBox Announces Partnership with the Parkinson’s Foundation 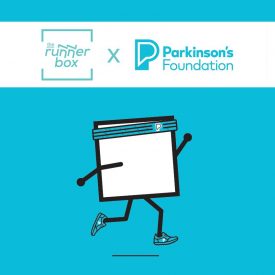 “We could not be more thrilled to partner with the Parkinson’s Foundation to provide a burst of motivation in the mail to these amazing Parkinson’s Champions who are doing their part to help make life better for people with Parkinson’s,” said The RunnerBox COO Courteney Lowe.

The RunnerBox will create custom boxes filled with items to fuel Parkinson’s Champions as they train to complete iconic marathons like the Chicago Marathon, The New York City Marathon and the Philadelphia Marathon. Parkinson’s Champions will receive a box to welcome them to the program and help participants discover food and tools to support their training journey. Boxes will include participants’ singlets and items specifically geared towards race day.

“Every year, Parkinson’s Champions take the lead in planning their own events or participate in endurance races in support of the Foundation’s mission,” said National Director of Fundraising Events Francesca Villa. “Through this partnership, we are pleased to support participants’ journey by providing increased access to endurance nutrition and gear.”

In addition to providing boxes, Parkinson’s Champions will receive exclusive deals on RunnerBox subscriptions,ensuring they can fuel their endeavors all year long.

To learn more about the program or to become a Parkinson’s Champion yourself, visit Parkinson.org/Champions.

The RunnerBox is the longest-standing subscription box in the endurance space. Offering boxes for runners and cyclists, it is a fun and easy way for any athletes to receive a regular supply of products to enhance their active lifestyles. Each box is filled with hand-picked products tested and approved by a team of professional athletes and nutrition experts. The RunnerBox and RiderBox offer subscriptions which are shipped every second month in addition to limited edition boxes and one time gift boxes. To learn more about The RunnerBox visit www.therunnerbox.com

About the Parkinson’s Foundation

Affecting an estimated one million Americans and 10 million worldwide, Parkinson’s disease is the second-most common neurodegenerative disease after Alzheimer’s and is the 14th-leading cause of death in the United States. It is associated with a progressive loss of motor control (e.g., shaking or tremor at rest and lack of facial expression), as well as non-motor symptoms (e.g., depression and anxiety). There is no cure for Parkinson’s and 60,000 new cases are diagnosed each year in the U.S. alone.

View all Releases by The Runner Box