The Ride for Mental Health Inspires Meaning and Purpose for Riders 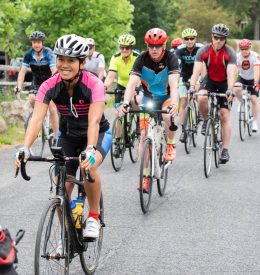 /ENDURANCE SPORTSWIRE/ – The Ride for Mental Health, June 25-26 in New Paltz, N.Y., is a weekend of cycling, camaraderie and fundraising in New York’s picturesque Hudson Valley just 90 minutes north of New York City. The Ride was founded in 2017 by Brooklyn-based attorney Mac Dorris who lost his son, Eric, then 21, to an accidental overdose as he struggled with mental health disorders.

In addition to raising funds for McLean Hospital, the largest psychiatric affiliate of Harvard Medical School, the Ride provides an outlet for healing and connection for others who have experienced tragic personal loss due to mental illness. Riders Beth Atwood, Rich Sporer and Eric Mehlenbeck have each found community and purpose in the annual gathering.

Atwood, from Elma, New York, discovered the Ride after her younger brother, Brent, took his own life in February of 2021. He was 55, married, successful, and a father of three, but depression led him to suicide. Brent was also a devoted cyclist. To honor his memory, Atwood assembled a team to ride with her and set a goal of raising $1,000. They raised $11,000.

“I was not prepared for how emotional the Ride would be,” Atwood said. “It was so beautiful in the Hudson Valley, and there was such a positive vibe from everyone, I kept thinking how Brent would have been in his element. When we finished, I broke down in tears.”

Rich Sporer, a retired data analyst, met Dorris cycling in Brooklyn’s Prospect Park. Sporer, who shared with Dorris that his twin sister had taken her life at age 19, has participated in the Ride since the beginning. In 2020, when the event went virtual due to Covid, he traveled to New Paltz anyway. He and Dorris completed the Ride together, alone.

“That was a special day,” said Sporer. “It made me feel good to know that I could help even one person.”

Mehlenbeck also knew Dorris from cycling in Brooklyn. He, too, lost a sibling to suicide. At the inaugural Ride in 2017, he cycled alongside Dorris’ oldest son, Greg. “Most of us don’t talk about mental health unless we’re in a tough place,” he said. “To share that experience with Greg Dorris in such a spectacular setting was pure joy.”

This year, Mehlenbeck, Sporer and Atwood will once again be among the hundreds of cyclists, volunteers, sponsors, and friends who gather in June amid the rural landscapes and mountain vistas of the Hudson Valley, to connect, offer hope, and “Ride Away the Stigma” associated with mental illness.

Corporate and community organizations, teams, and individuals can participate in person or virtually and create their own fundraising pages. Sponsorships are available, and volunteers are needed. Discounted registration is available through March 31. Get details at www.rideformentalhealth.org, by emailing info@rideformentalhealth.org and by following The Ride on Instagram, Facebook and Strava.

View all Releases by Kaitlyn DeSimone