The Ride for Mental Celebrates Hope and Healing, June 25-26 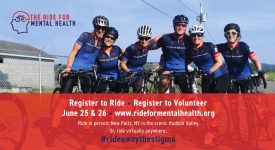 NEW YORK and BOSTON /ENDURANCE SPORTSWIRE/ – Joel Klein recalls driving frantically to the hospital in White Plains, NY, while his teenage daughter, Ava, drifted in and out of consciousness. She was suffering from the debilitating effects of anxiety, PTSD and Borderline Personality Disorder (BPD), according to specialists at McLean Hospital in Boston where she was referred. At McLean, an affiliate of Harvard Medical School and the top psychiatric hospital in the nation (U.S. News & World Report), Ava found world-class treatment, and hope for the future.

When Klein cycles through New York’s picturesque Hudson Valley during the year’s Ride for Mental Health, June 25-26, he will do it for McLean, for Ava, and for the many thousands of families like his looking for care, compassion and a light in the darkness that so often accompanies mental illness.

New York City attorney Mac Dorris founded The Ride for Mental Health in 2017 at a time when he knew that darkness all too well. His son, Eric, who suffered from BPD and other disorders, had died at 21 from an accidental overdose while an outpatient at McLean. The Ride became his light and his path forward out of profound grief. Then something amazing happened. The light of hope, community and resilience grew stronger each year as more riders and volunteers gathered in New Paltz, NY, to join Dorris in his mission to raise money for McLean and to “ride away the stigma” surrounding mental health.

Klein will ride this year along with hundreds more, many of whom have inspiring stories and intensely personal motivation for riding or volunteering. Anna Rittenberg will be riding for the first time. Two years ago, she spent five weeks at McLean in intensive treatment for Schizophrenia and Bipolar Disorders. “Without the support of the nurses and doctors and McLean, I never would have been able to get back to baseline and to where I am today,” Rittenberg said.

The Ride will attract roughly 500 cyclists and dozens of support staff and volunteers to what has become the premier cycling fundraiser in the U.S. exclusively benefitting mental health. In addition to 25, 50 or 100-mile rides, plus a 14-mile “family fun ride,” there is also the option for anyone, anywhere to ride virtually. More than $800,000 has been raised for McLean to date, and the $1 million mark may be reached this year. Klein and Rittenberg have already exceeded their fundraising goals of $5000 each.

“The Ride for Mental Health is like a homecoming for so many of us that benefit from the community of kindred spirits, many of whom have been impacted by mental illness in some way,” said Dorris. “The best part is hearing everyone say what a happy occasion it is, and how much fun it is to ride together in such a beautiful setting in the Hudson Valley, doing what we can for a great cause, and for each other.”

Corporate and community organizations, teams, and individuals can participate in The Ride for Mental Health, whether in person or virtually, and create their own fundraising pages. Sponsorships are available, and volunteers are welcome. Details are available at www.rideformentalhealth.org, by emailing info@rideformentalhealth.org and by following The Ride on Instagram, Facebook and Strava.

The Ride for Mental Health was founded by New York City attorney Mac Dorris, inspired by his son, Eric. A bright and funny boy, Eric struggled with mental health issues as a young man. He was eventually diagnosed with borderline personality disorder among other conditions, and tragically died of an accidental overdose at the age of 21. Mac, an avid cyclist, created The Ride to honor his son’s life, and to shine a light of hope and caring for others. Eric’s memory lives on in the important work being funded by The Ride for Mental Health, and in the moments of connection and camaraderie that make the event so rewarding.

Funds from The Ride for Mental Health fuel a range of programs across McLean Hospital’s multi-campus network. These initiatives include expanding access to clinical care for young people, scholarships providing financial assistance for patients and their families, development of a state-of-the-art academic and residential center for child and adolescent programs, public education and community training, and McLean’s nationally recognized research and innovation. McLean maintains the largest neuroscience and psychiatric research program of any private psychiatric hospital in the U.S., exemplified by the Eric Dorris Memorial Research Fellowship. Since its inception, the fellowship has been awarded to four outstanding post-doctoral scientists, with a fifth fellow to be chosen in spring 2022. With the help of funding from The Ride for Mental Health, McLean Hospital continues to improve the lives of people and families affected by psychiatric disorders by advancing our understanding of mental illness, leading to earlier and more effective interventions.

The Ride for Mental Health

View all Releases by Kaitlyn DeSimone