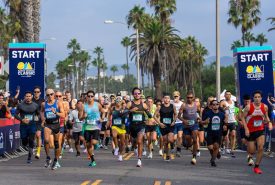 SANTA MONICA – September 11, 2022 /ENDURANCE SPORTSWIRE/ – The 6,000 runners and walkers who stepped to the starting line for the 17th running of the Santa Monica Classic presented by ASICS were treated to the quintessential Southern California vibe: palm trees swaying, waves crashing, the Ferris wheel and party scene atop the Santa Monica Pier.

“This is such a vibrant community,” said men’s 5K winner Sergio Reyes. “There’s so much color down by the beach, very interesting folks that add a lot of flair to the place. And Santa Monica is obviously very beautiful to run through.

“It’s alive and energetic, even at 8 a.m. on a Sunday. It’s awesome to be a part of this community.”

When it came to the 5K, no one was faster than Reyes, who lives in Palmdale. On a humid morning, Reyes, a 40-year-old masters runner, sped to the tape in 15 minutes, 51 seconds, a 5:07 per-mile pace. Santa Barbara’s Cory Smith finished second in 16:16.

“I felt a little bit like a car wash sponge the entire way,” added Reyes. “I was drenched. It was humid. But I made it across the finish line and thankfully chose the 5K today. Running that pace for 10K would have been punishment.”

Venice Beach’s Allison Lynch defended her title in the women’s 5K, winning in 18:51, a 6:04 per-mile pace. She finished eight seconds ahead of Deanna Erwin of Pasadena.

Lynch moved to SoCal from New England and gave props to the local running scene.

“There’s a ton of welcoming people,” she said. “It’s a fun community.”

It was a big morning for masters runners as Franziska Vansickle won the women’s 10K in 37:54, a 6:06 per-mile pace. Vansickle won by nearly two minutes with Alejandra Santiago of Inglewood taking second in 39:44.Vansickle was born in Germany and lived the past eight years in Switzerland before recently moving to Huntington Beach.

Of the Santa Monica atmosphere, Vansickle said, “This is absolutely amazing. The palm trees and the ocean. It’s just outstanding. We get to race where people go on vacation.”

Vansickle said the Southern California running community is more inclusive than in Europe.

“Here, it’s much more of a community,” she said. “It’s much more friendly, everyone is helping each other. In Europe, it’s a lot more competitive and tougher.”

In the men’s 10K, it was a Gutierrez themed podium. Luis Gutierrez of Rancho Cucamonga won in 32:12, a 5:11 per-mile pace. John Gutierrez of Santa Maria, no relation, took second in 32:32. It had been nine years since Luis ran the Santa Monica Classic and that year he opted for the 5K.

Winning in a sprint finish down Ocean Ave, Luis said, “We finished basically together. I just went for the kick and I got it.”

Regarding the race-day surroundings, John Gutierrez looked at the party unfolding atop the pier, the palm trees, the ocean and said, “The finish line, man, this is so much fun.”

The Santa Monica Classic cares about giving back to the community. More than 25 runners participated with Team TMF, raising funds to support The McCourt Foundation, which is dedicated to finding cures for neurological diseases. For complete results, photos and more, visit www.mccourtfoundation.org/santa-monica-classic.

About The McCourt Foundation

The McCourt Foundation (TMF) is a 501c3 organization committed to building a healthier world through research, partnerships, and education. TMF empowers individuals and communities to make a difference through its events and educational forums. Now in LA and Boston, we have expanded our giving capacity and overall impact from coast to coast.

Since 1992 when the McCourt brothers organized a road race to honor their father who battled Multiple Sclerosis, TMF committed itself to enhance the lives of patients and families affected by neurological diseases (MS, ALS, Alzheimer’s, and Parkinson’s). From this single fund-raising event, TMF has expanded its Mission to include youth health & wellness and other health challenges, and its world-class portfolio of events to include the Los Angeles Marathon presented by ASICS, LA Big 5k, Rose Bowl Half Marathon & 5K, Santa Monica Classic 5K/10K, Boston Waterfront 5K, Tour de South Shore, the McCourt Gala & Auction, and the Educational Update. These nine community events engage more than 100,000 participants each year and are expertly leveraged by TMF to drive impact. For more information, please visit http://www.mccourtfoundation.org/.

View all Releases by Los Angeles Marathon | The McCourt Foundation