The King of All Crits Weekend Returns April 9-10 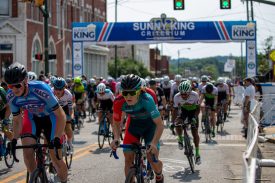 The Alabama Cycling Classic will bring the best in American criterium racing to the city of Anniston on April 9th. Beginning at 10 a.m., there will be twenty races on a closed course throughout the day, including kids, juniors, men’s and women’s amateur races, a new men’s masters 45+ category, and our professional men’s and women’s races will close out the day.

“We’re excited to host the first event in the National Criterium Series, it’s a big step for American cycling with an overall prize purse of $100,000. The series will bring the best professional teams to the City of Anniston for a thrilling day of racing in Anniston’s Downtown proper,” said race director Marilyn Hill. “We also have a robust livestream online for those that cannot join us, streaming nine hours of racing.”

The 2022 livestream broadcast presented by Sparklight will be viewable via annistoncycling.com and on various cycling media websites from 12 p.m. to 9 p.m. CDT. The racing action will be called by professional sports commentator Brad Sohner and former professional cyclist and Sunny King Criterium champion Lauren Hall. It’s one of the best days of racing to watch in person or online.

Alongside the Sunny King Criterium, the City of Anniston will once again host their annual Noble Street Festival with fun for everyone! There will be live music, the Sunny King Kid Zone, food and craft vendors, the Downtown Throwdown Crossfit competition and more!

“We are anxiously awaiting the 20th anniversary of the Noble Street Festival & Sunny King Criterium,” said Main Street Anniston Director Jackson Hodges. “Last year’s event broke records in attendance and impact, and with the team we have around us I’m confident that 2022’s event will do the same. The festival itself will be led by our great event coordinator, Kara Eden, thus all interested vendors & participants should reach out to her at 256-371-3711.”

Day two of the Alabama Cycling Classic will be held on Sunday, April 10th in Piedmont. The Piedmont Criterium begins at 8 a.m. and wraps up around 3 p.m. with a total of eight races for the day. Both events have registration open to the public on Bikereg.com under the event names; Sunny King Criterium and Piedmont Criterium.

The Sunny King Criterium began in 2002 as Anniston’s signature cycling event for professional and amateur male and female cyclists from around the globe. A second day of racing was added in 2014 for amateur and elite athletes. The start/finish line for the criterium is located at 11th and Noble streets in downtown Anniston, with 21 categorized races for adults and juniors. The criterium is one of 17 national cycling events on USA Cycling’s Pro Road Tour. All races are managed by Start Smart Events.

For race information and sponsorship opportunities:

View all Releases by Chelsea Communications