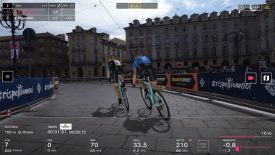 The virtual race began last Friday with the first four stages of the Grande Partenza. Registrations still open at www.girovirtual.com

The Giro d’Italia Virtual hosted by BKOOL, an indoor cycling project developed by RCS Sport in collaboration with BKOOL, kicked off on Friday morning. The event offers cycling fans the opportunity to experience multiple stages of the Corsa Rosa from home, riding their own bike, through a high-definition video simulation with an avatar and 3D elements developed by BKOOL, for an immersive indoor cycling experience never seen before.

Any cycling fan, at any time, will be able to enter some of the most spectacular routes of the 2021 Giro d’Italia, an exclusive project with several different phases of the event, suitable for owners of a smart trainer or smart bike, that is set to continue until May 2022. Registrations remain open at www.girovirtual.com.

Points accumulated from the event will give participants the chance to win official Giro d’Italia jerseys and products, invitations to the Giro d’Italia and other important Italian races, accessories such as shoes, helmets, glasses or cycling clothes… and, of course, subscriptions to both Giro d’Italia Virtual and BKOOL.