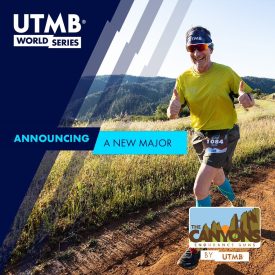 The Canyons Endurance Runs by UTMB becomes first ever UTMB World Series Major in the Americas, giving all finishers more chances to qualify for the UTMB World Series Finals; Taking place from the 28-29 April 2023 in Auburn, California, registration is now open

CHAMONIX, France/AUBURN, Calif. USA/TAMPA, Fla. USA (Dec. 8, 2022) /ENDURANCE SPORTSWIRE/ – The Canyons Endurance Runs™ by UTMB® has been selected as the first ever UTMB World Series Major to be hosted in the Americas. Taking place from the 28-29 April 2023 in Auburn, California, the event gives all finishers additional opportunities to qualify for the UTMB World Series Finals held at the world’s biggest trail running event, UTMB Mont-Blanc. Registration is already open, here.

Three UTMB World Series Majors are held each year and these pinnacle events across the Americas, Europe and the Asia-Pacific region award double the amount of Running Stones to all finishers that can be used in the UTMB World Series Finals lottery.

In total 225 runners are also granted automatic qualification for the UTMB World Series Finals through each Major. This includes age-group category winners and the top 10 male and female runners in the 100M, 100K and 50K categories who gain automatic qualification to the respective UTMB (100M), CCC (100K) and OCC (50K) races at UTMB Mont-Blanc.

Adding even more appeal to runners, The Canyons Endurance Runs by UTMB is also a Golden Ticket Race for the Western States Endurance Run (WSER), with the top two male and female finishers in each distance winning their place on the start line of the 2023 WSER. The race is also a qualifier for WSER 2024, with runners who complete the 100-mile distance in under 36 hours and the 100km in 20 hours qualifying for the WSER lottery.

Founder and Race Director for The Canyons Endurance Runs by UTMB, Chaz Sheya said: “I am thrilled to share that The Canyons Endurance Runs by UTMB is now the Americas Major. It is an honor to be one of three Majors in the UTMB World Series, with double Running Stones and many more entries to the World Finals in Chamonix! I am also excited to share the history of the Canyons and the Western States Trail, where modern-day mountain ultra trail running started. We look forward to putting on a great event next April in Auburn, California, the endurance capital of the world!”

The Canyons Endurance Runs by UTMB takes place in the historic gold-rush town of Auburn, California, an iconic destination in trail running considered the birthplace of mountain ultras in the foothills of the Sierra Nevada Mountain Range. Runners in the 100-mile race will experience some of the most scenic and rugged sections of the Western States Trail, as they cover up to 7,300 meters (24,000 ft) of elevation gain, passing by the river crossing at Rucky Chucky then through the Canyons to visit infamous Devil’s Thumb and Swinging Bridge. All finishers will be awarded eight Running Stones for their extraordinary effort.

In terms of the other two UTMB World Series Majors, Val d’Aran by UTMB in the heart of the Spanish Pyrenees will be the continental European Major for the second time from the 5-9 July 2023. The event will celebrate its third edition in 2023, turning the Val d’Aran valley and its peaks of over 2,000 meters (6,500 ft) into the epicentre of trail running.

For the second consecutive year, Doi Inthanon Thailand by UTMB will be the Asia-Pacific Major. Taking place in the Chiang Mai province in northern Thailand from the 8-10 December 2023, the event takes runners to the summit of the highest mountain in the country, Doi Inthanon. The 2022 edition is taking place this weekend, the 8-11 December, with over 5,400 runners representing 64 nationalities ready to toe the start line on their journey to UTMB Mont-Blanc and the UTMB World Series Finals.

UTMB Mont-Blanc is the pinnacle event of the trail running year. 2023 is set to be an historic edition as it celebrates not only its 20th anniversary, but also its first as host to the UTMB World Series Finals in the UTMB, CCC, and OCC races, taking runners on an extraordinary journey through the trails of the Mont Blanc region between France, Italy and Switzerland.

To date there are 32 events across six continents currently confirmed for the 2023 UTMB World Series, with the full calendar to be revealed before the end of the year. Runners can choose their 2023 UTMB adventure here.

UTMB® World Series is the world’s ultimate trail-running circuit that unites the sport’s biggest stars and passionate runners through the best, leading international events in the most stunning locations.  Built on a passion for the mountains with sustainability at its heart, UTMB® World Series gives all trail runners the chance to experience the UTMB® adventure across the world, with events taking place across Asia, Oceania, Europe, Africa and the Americas. It is the only place where runners can begin their quest to UTMB® Mont-Blanc, France, where the prestigious UTMB® World Series Finals will be held. For more information, visit www.utmb.world.

Over the last 18 years, and since the creation of UTMB® Mont-Blanc in 2003 by a group of passionate friends, UTMB Group has been the driving force behind the development of trail running. The UTMB® Mont-Blanc is the sports pinnacle event, and every year, 10,000 runners earn their place on the start line. UTMB Group also pioneered the LiveTrail® technology, an innovative digital service that supports the management of endurance races. Revered by hundreds of thousands of athletes, UTMB® has become a global, premium, and leading brand. In May 2021, UTMB Group partnered with The IRONMAN Group to launch the UTMB® World Series, which brings together many of the best international events on the planet to provide exclusive access to the sport’s pinnacle event, UTMB® Mont-Blanc. The UTMB® World Series is built on the founding principles of UTMB® Mont-Blanc: surpassing oneself; fair-play; respect for people and the environment; and solidarity. Find out more at www.utmb.world.

The IRONMAN Group operates a global portfolio of events that includes the IRONMAN® Triathlon Series, the IRONMAN® 70.3® Triathlon Series, 5150™ Triathlon Series, the Rock ‘n’ Roll® Running Series,  IRONKIDS®, World Triathlon Championship Series, premier running events including the Standard Chartered Singapore Marathon™ and City2Surf®, UTMB® World Series events including The Canyons Endurance Runs by UTMB, Tarawera Ultra and Ultra-Trail Australia™, Epic Series™ mountain bike races including the Absa Cape Epic®, road cycling events including Haute Route®, and other multisport races. The IRONMAN Group is the largest operator of mass participation sports in the world and provides more than a million participants annually the benefits of endurance sports through the company’s vast offerings. Catering to the full athlete experience, the company portfolio also includes FulGaz® virtual cycling, the most realistic indoor riding experience connected fitness application aimed at preparing athletes for real-world events. Since the inception of the iconic IRONMAN® brand and its first event in 1978, athletes have proven that ANYTHING IS POSSIBLE® by crossing finish lines around the world. Beginning as a single race, The IRONMAN Group has grown to become a global sensation with hundreds of events across 55+ countries. The IRONMAN Group is owned by Advance, a private, family-owned business. For more information, visit www.ironman.com/about-ironman-group.