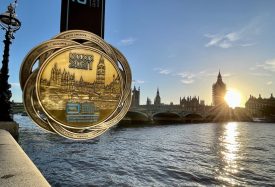 The inaugural AbbottWMM Wanda Age Group World Championships will take to the streets of London this Sunday, 3 October as part of the 2021 Virgin Money London Marathon.

It’s been a long-time coming after the 2020 mass event on the streets of London had to be cancelled due to the COVID-19 pandemic. The event will combine qualifiers from editions one and two of the Age Group World Rankings, making for some highly competitive age categories as many of the world’s best marathon runners aged 40 and above battle it out for World Champion status.

Competing runners will wear a special back bib which means they can be identified on course – and spot their competition – and all finishers will be rewarded for their efforts with a special world championship medal, in addition to the official Virgin Money London Marathon finisher medal. The top three in each age category (male and female) will also receive an award which will be presented at a function on Sunday evening.

“The standard of age group running globally will make for an extremely competitive race across all ages on Sunday, and we are looking forward to seeing who makes the podium. ”

Hugh Brasher, Event Director of the Virgin Money London Marathon, said: “We are delighted to welcome the world’s best age group runners to London. The inaugural AbbottWMM Wanda Age Group World Championships is another great addition to this year’s event. I know the speed of these runners is going to truly show that age is no barrier and will be an inspiration to us all.”

We will host a media session on Friday 1 October, 2.45pm (BST) to hear from Hugh Brasher, Event Director, Virgin Money London Marathon, and Tim Hadzima, Executive Director, Abbott World Marathon Majors, along with some notable age group runners who will share their stories, who are listed below.**

Another 1984 Los Angeles Olympic marathoner. Yuko came 34th representing Hong Kong where she lived for many years. She won her age group in the 2018/2019 qualifying series with strong performances in Berlin and Stockholm. A Japanese native, she moved to the UK in 1998 and after a 15 year break, began Masters running in England and in no time at all got back to her competitive ways.

Jeannie is from South Korea and came to the US back in 1968. She started running at the age of 35 for weight loss and got hooked. She only has Tokyo to run to complete her Six Star journey and runs an average 50-60 miles every week.

Eileen hails from South East London and has run the Virgin Money London Marathon 19 times, including last year’s virtual event. Her personal best was back in 1992 with a time of 4 hours 40 minutes.

She started running a mile a day when she was 53 and it grew from there.

She has been the oldest runner in the Virgin Money London Marathon for the last two years and will be the oldest female out on the course this year at the age of 86.

Eileen has five marathon age group awards (four from London and one from Lochaber). She is looking to add a world championship title to her accolades.

Jose is from Portugal and will be running his first Abbott World Marathon Major when he competes in London in the inaugural Age Group World Championships. He has run 23 marathons and is an active member of the AbbottWMM Global Run Club.

“For me it is a huge honor to compete and represent Portugal in the Championship and I am striving to be one of the best athletes in the world in my age group. I also want to complete the six major marathons and London will be the first on my journey.

Volker is a German-American qualifier, based in Illinois, who is competing in the 50-54 category and will also be added to the Six Star Finisher Hall of Fame when he crosses the finish line on Sunday.

He started his running career at the age of 45 and has since concluded 13 marathon races, with a personal best of 2:53:27 at the New York Marathon in 2019. Together with the Tokyo Marathon finished in the same year, Volker achieved enough points to qualify for the inaugural Age Group World Championships.

* numbers correct at time of release

Encompassing an annual series for elite runners and elite wheelchair athletes, AbbottWMM also applauds the achievements and passion of everyday champions from around the world. The AbbottWMM Six Star System is an online results hub that celebrates every runner who has completed from one to six of the races in the series and encourages them to ‘Reach for the Stars’.

ABOUT ABBOTT
Abbott is a global healthcare leader that helps people live more fully at all stages of life. Our portfolio of life-changing technologies spans the spectrum of healthcare, with leading businesses and products in diagnostics, medical devices, nutritionals and branded generic medicines. Our 109,000 colleagues serve people in more than 160 countries.

Wanda Sports Group is a leading global sports events, media and marketing platform with significant intellectual property rights, long-term relationships and broad execution capabilities through which to create value for stakeholders in all parts of the sports ecosystem, from rights owners, to brands and advertisers, and to fans and athletes. Wanda Sports Group owns, or otherwise have contractual rights to, an extensive portfolio of global, regional and national sports properties from which to generate revenue across the value chain, including events operation, media production and media distribution, sponsorship and marketing, digital solutions and ancillary services.

Connect with us at www.wandasports.com