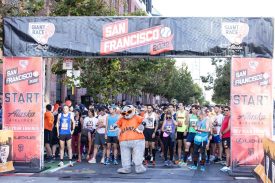 The event began on Saturday, August 20 with the Giant Race Health and Wellness Expo presented by lululemon. The expo featured fitness classes sponsored by Bauman Wellness, yoga classes on the Field led by lululemon ambassador Susannah Freedman, a kids race and the inaugural “Grand Slam” Family Skills Challenge that included attempting to walk across a balance beam from 1st to 2nd base, catching fly balls in the Outfield, throwing strikes in the Bullpen, hitting in the Batting Cages and Giants trivia.

On Sunday, the Giant Race 5K and 10K races kicked off in front of Oracle Park and took participants on a scenic journey along the Embarcadero to the Ferry Building and back along the SF Bay Trail – culminating in the iconic “Finish on the Field”. After the Race, participants celebrated by mingling, stretching and snapping photos in the Outfield followed by a number of drinks, food and live music entertainment options at the ballpark. Results for the 10K and 5K races can be found here.

“The organization was thrilled to welcome our fans back to Oracle Park for the 13th annual San Francisco Giant Race, presented by Alaska Airlines,” said Joey Nevin, Vice President of Giants Enterprises. “There is something so special that happens when our community gets together to celebrate their two favorite things – fitness and the San Francisco Giants. We were excited to bring this event back and add new elements and activities that were received extremely well.”

For runners who could not attend the in-person event, registration for the San Francisco Giant Race virtual 5K and 10K will remain open until September 21st. Virtual participants receive a swag bag including a custom finishers medal, t-shirt, Race bib as well as a Brandon “The Captain” Belt Bobblehead and “Buy One Get One” tickets to a San Francisco Giants game. More info can be found at giantrace.com.

About the Giant Race Series: The Giant Race Run/Walk Series presented by Alaska Airlines represents the perfect combination of running and baseball. Through traditional events held in Scottsdale, Sacramento, San Jose and San Francisco, the Giant Race unites an array of Giants-inspired themes at every level of professional baseball. After stops in Scottsdale during Spring Training and at Minor League facilities in Sacramento (Triple-A, Sacramento River Cats) and San Jose (Single-A, San Jose Giants), the Series ends on the field at Oracle Park with a 20,000-participant race on the flattest and fastest course in San Francisco. The San Francisco Giants and Giants Enterprises have worked together to give baseball fans and running enthusiasts an unforgettable journey of run, walk, fitness, and training experiences all season long. For more information, visit www.giantrace.com.