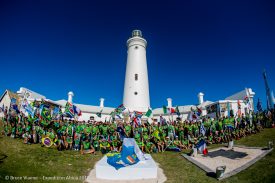 /ENDURANCE SPORTSWIRE/ – That African proverb was quoted by Clinton Mackintosh of the veteran South African team Cyanosis AR, when asked how he felt about the Adventure Racing World Championships being hosted in South Africa next year.  He said it embodies the spirit of Africa and Adventure Racing.

That message of the strength in community is at the heart of what is planned for South Africa’s AR World Championship next October, and helps explain the astonishing response the race has received since entries opened at the start of the month.

An unprecedented 150 teams have signed up so far, from all around the globe, attracted by the location in the Eastern Cape, the reputation of race organisers Stephan and Heidi Muller of Expedition Africa, and the lure of the Adventure Racing World Championship.

The 2023 championship will be hosted in Kouga and the Eastern Cape from October 16-29th with the venue at the Cape St. Francis Resort.  Teams have signed up for a 700km course, which will be open for 9 days and include kayaking, trekking, mountain biking and rope activities in locations across the province.

Very few of the teams of four taking part are sponsored and they pay their own entry and travel expenses for the trip, so it is a big commitment, but it’s a race which it seems no team wants to miss.

Currently there are teams signed up from 33 countries, and for a true world Championship that is the gold standard; to have the best possible international representation. Among the international teams France and the USA lead the way with 9 teams each, there are 8 from Spain, 7 from the UK, 6 from Canada, 5 from Brazil, 4 from Australia, and the list goes on.

The flag parade at Cape St. Francis before the race will be a colourful and joyous celebration of adventure racing and its values.

“We are overwhelmed and humbled by the response to the first African AR World Championship,” said Heidi Muller from Expedition Africa, “and we count our blessings that our race can welcome so many friends and visitors from around the world.

“We can’t thank the teams enough for their support and the trust they place in us.  We will deliver an unforgettable African experience for them all to enjoy and show them the incredible variety and beauty of the Eastern Cape. They will be welcomed by all of the communities here, who will show them true African hospitality and help celebrate this international festival with us all.”

Just as astonishing as the international entry is the home entry from South Africa, with 53 teams entered. That is more than the total entry for most expedition adventure races, and by far the most teams from a single nation ever to enter an AR World Championship. The country has around a dozen annual adventure races, including the ARWS Africa Series, but it is the home of Expedition Africa, and over 11 years the race has schooled a generation of South African adventure racers.

Team Cyanosis is among them, and Mackintosh went on to say.  “We have had the privilege to race around the world for 18/19 years and have been fortunate enough to participate in 8 AR World Champs so when we heard that South Africa was going to host the 2023 ARWC we jumped at the opportunity to sign up to race in our home country.

“South Africa truly is an outdoor playground. The terrain can be so diverse from one region to the next that even the most experienced racers will be tested mentally and physically.  The host team of Heidi and Stephan Muller from Expedition Africa have so many years of racing and organising behind them and we know the race will be challenging and incredibly beautiful. We can’t wait to see what new areas they will take us to in 2023.”

Other South African entries include Team Merrell, the first ever and multiple winners of Expedition Africa, and the Merrell Songlines team, who recently completed a clean sweep of the shorter ARWS Africa races to take the title of African Adventure Racing Champions for the second year in a row.  They also finished 8th at this year’s ARWC in Paraguay.

Past international winners of Expedition Africa who have entered include the Greener Adventure Team from Sweden and this year’s winners in Lesotho, Team Estonian ACE Adventure La Sportiva. When it was announced Expedition Africa would host the World Champs, Silver Eensaar from ACE Adventure memorably said it was “the world’s most loved race” and events this past 2 weeks have shown how right he was.

So many past Expedition Africa teams are returning to race in 2023, and the entry list reflects relationships built up by Stephan and Heidi Muller over many years with racing communities around the world, particularly in France, the UK and Ireland, countries which are all strongly represented. The race next year will be a gathering of friends for them.

Several current ARWS Race Directors from Qualifier races and Regional series are also competing, as well as some past ARWS Race Directors. Pongo Baker from Costa Rica was the Race Director for ARWC in 2013 and Antonio De La Rosa was Race Director at the 2010 ARWC in Spain and is returning to adventure racing after undertaking many other different endurance challenges in recent years.

Another standard to judge a championship by is the quality of competition, and the entry list includes almost all of the World’s top 10 ranked teams and of the teams who placed in the top 10 at this year’s ARWC.  The #1 bib is reserved for the current champions, Team Avaya of New Zealand, and the winners of each of the 9 ARWS Qualifier races around the world through next year will all receive a place.  For the first time ever, so will the winners of the ARWS Regional Championships in Oceania, Africa, Europe and North and South America.

The support for the race reflects the growing support for the Adventure Racing World Series.  As well as organising Expedition Africa Heidi Muller is just completing her first full year as CEO of the ARWS and has overseen a big expansion in the series and helped strengthen the community of race organisers around the world.

The team the Mullers lead at Expedition Africa are well placed to deliver their trademark high quality race for such a huge number of teams. Over 11 years of organising they have staged races in every province of South Africa, in Eswatini and Lesotho and on the Indian Ocean Island of Rodrigues. They’ve also staged Expedition India twice in the Himalaya.

“We are confident we have all the resources we need to run the race safely and well,” said Heidi Muller.  “We had 70 teams on the tiny island of Rodrigues and are used to big races. We have built up a team of wonderful staff and volunteers over a decade who can cope with anything, and we are so lucky to have them. The local communities are also incredibly supportive of the race, and that makes a big difference, and the surrounding towns have ample accommodation and facilities.”

The race will bring a valuable economic boost to the area, as well as the attention of media from around the world, in an area which depends on tourism for jobs and income.  The host resort was sold out before entry even opened, and they are now facilitating all other teams to manage their accommodation nearby. Many teams are travelling with family or staying after the race to enjoy the game reserves and beaches.

“We are super excited to host all the teams and their families from abroad and South Africa to our beautiful village. Every little shop in town will be ready to welcome them and show our true South African hospitality” said Hanti van der Westhuizen of St Francis Tourism.

The Kouga Deputy Mayor, Hatting Borman added, “We are overwhelmed by the response from around the world, and grateful for the opportunity to host not only the first Adventure Racing World Championship in South Africa, but to hold it in Kouga, Eastern Cape. We can’t wait to show off our tucked away gems to all these adventurers.”

Muller acknowledged the logistics for such a race would be challenging, particularly as the race provides all of the logistical support for the teams, including transporting bikes and gear boxes and providing kayaks. (Teams don’t require support crews at ARWS races as they add additional cost for them and bring large numbers of vehicles into remote areas.)

There will be a hard year of work ahead for the Expedition Africa team, but for the moment she is still enjoying “the magic of it all, with so many teams coming together in sport and friendship, and visiting our country of South Africa.”

And she is happy to welcome a few more teams still. “This is a once-in-a-lifetime opportunity to race a World Championship in South Africa and we can’t turn away anyone who wants to come and share it with us.  So, any teams who are still thinking about coming should please get in touch with us quickly.”

At the 2023 Adventure Racing World Championship Kouga, the global adventure racing community will surely “go far” and “go together”.

Images from the ARWC 2023 launch event and from course scouting in the Eastern Cape, logos and the launch press release, are available and free for editorial use at; https://drive.google.com/drive/folders/13xBEGK1TGniE6k0rcSxMzG7Ie1WFhZuU?usp=sharing

Interview opportunities with Stephan and Heidi Muller are available on request from media@arworldseries.com

Expedition Africa is proudly supported by; 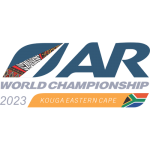