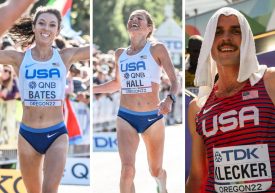 /ENDURANCE SPORTSWIRE/ – Team UCAN runners had a successful showing competing against the best in the world, with three Top-10 finishes at the 2022 World Athletic Championships in Eugene, OR.

Hall finished as the top American woman in 2:22:10 and continues to impress with her longevity each time she toes the line. “That was the most fun I’ve ever had in a race,” said Hall, in a post on Instagram.

Bates ran a personal best time of 2:23:18, over a minute faster than her previous best.

“To be top-10 in the world is really, really cool,” said Bates, in a post-race interview with FloTrack. “To run a PR is something I’ll never forget.”

On the men’s side, Joe Klecker ran a season best time in the 10,000m to finish 9th overall against a highly competitive field. “By no means was this a perfect race for me, but it was a huge step to moving where I want to be,” said Klecker on Instagram after the race.

For each of these athletes, fueling with UCAN was a key part of their training and success on race day.

Sara Hall, who set the American record in the half marathon earlier this year and ran the 3rd fastest U.S. women’s marathon of all-time in 2020, has been a long time user of UCAN. As a human biology major, she’s always been conscious of what she puts into her body. Hall’s pre-race breakfast is 2 scoops of UCAN Energy + Protein powder mixed with the Unflavored UCAN Energy powder to give her body a steady stream of energy throughout the race.

“UCAN is a product I’ve really believed in for many years,” says Hall. “I’ve used it to fuel all of my fastest races. I love that it provides a steady-release of carbohydrates that’s also easy on your stomach. It’s a really unique product I haven’t seen elsewhere.”

Emma Bates battled through GI distress in all five of her previous marathons, including when she finished 2nd at the 2021 Chicago Marathon. She finds UCAN to be much easier to digest during her training and races compared to sugary fuels, and relied on the Edge energy gels during the race to fuel her 7th place finish and personal best time..

“What I really like about UCAN is that I don’t feel an immediate change, but I notice my body just feels better for longer,” says Bates. “With UCAN, I’ve felt so much better throughout the runs compared to taking other gels, where I would feel this burst of energy, but then it would be so short-lived and it would mess with my stomach. I actually look forward to taking UCAN during the marathon because it’s so easy on my stomach.”

Joe Klecker won the 10,000m National Championship earlier this year, after making the U.S. Olympic team in the event last year. As a middle-distance runner, he covers long distances in training and counts on UCAN to keep him fueled and help him recover quickly.

“I like the Edge gels pre-workout for sustained energy throughout the entire run,” says Klecker. “Before using Edge I’d often bonk out on my longer workouts. I’ve also struggled with sleeping through the night without hunger cravings when I’m training at a high volume. The Energy + Protein really curbs overnight hunger and helps my body recover through the night.”

UCAN is trusted by the best runners, but it’s not just for elite athletes. A long-lasting energy source that keeps blood sugar stable without sugar or stimulants has significant benefits for everyone. Whether you’re an athlete who needs energy to power you through your workouts and competitions, or an active individual looking to manage your fitness and health goals, UCAN provides a reliable solution with its steady supply of efficient calories to meet your energy needs.

Learn more about how our athletes fuel their training and races with UCAN here: ucan.co/running-champions

Based in the US, UCAN is a company that’s changing the way you think of energy – with food products that provide athletes and active people the foundational energy insurance that they can rely on to achieve their performance and fitness goals. UCAN products utilize LIVSTEADY™, a slow-releasing, low glycemic carbohydrate that delivers steady, long-lasting energy without sugar. This patented energy source is unique to UCAN products and was originally created to help a child with a rare metabolic disorder maintain stable blood sugar. UCAN Edge, Energy Pouches, Powders, Energy Mix and Energy Bars are trusted by over 400 pro and college teams, Olympians, elite endurance athletes, thought leaders in health and performance, and recreational athletes, all seeking a healthy way to unlock peak performance. Learn more at ucan.co, and get the latest news in the UCAN world by following @GenUCAN on Facebook, Instagram and Twitter. UCAN nutrition products are currently available in powder, pre-mixed, energy mix, and bar formats, in a variety of flavors, at 350+ specialty run, bike and tri stores around the country, Lifetime gyms, and can be purchased online at ucan.co or on Amazon.