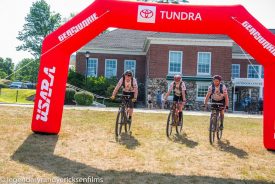 /ENDURANCE SPORTSWIRE/ – Team Toyota Tundra, which has been on a tear throughout the U.S. in 2022 following its win at the 2021 U.S. Adventure Racing Association National Championship, took the win at the 2022 Maine Summer Adventure Race.

The adventure race took place for the sixth time in New Gloucester, Maine, on July 16 and 17. For the first time, it was a USARA Regional Championship, meaning the top mixed premier division team in the 24-hour race scored a free entry to this year’s USARA National Championship, taking place in Bishop, California, September 16 and 17, 2022.

The Toyota Tundra team, composed of Brian Mayer, Mari Chandler, and Justin Bakken, was the only team to obtain all 57 checkpoints along the 130-mile course, undeterred by hot temperatures and the 11,000 feet of combined elevation gain.

Team VERT took the overall win in the 8-hour race and Good ‘Nuff won the 3-hour race, with both teams clearing their respective courses.

All three courses made use of the detailed orienteering map of the property at Pineland Farms, the host location for the race. For the 24-hour race, teams were required to collect lettered checkpoints to spell a choice of two out of six words. A bike to the base of Pismire Bluff followed, with teams climbing 400 feet up to the fourth checkpoint of the race and a view of the 19-mile paddle section that would follow.

Arriving at the north end of Crescent Lake in Casco, Maine, teams got to choose their kayaks of choice from a fleet of more than 100 vessels, and then took off to collect six checkpoints on the lake, Panther Pond, and the Tenny River, which connects the two waterbodies.

Next up was the adventure bike, a long and technical mountain bike through the Jugtown Trails, which the racers discovered are quite sandy in places. This stage also included the highlight of Hacker Hill, a bluff with a stunning view west toward the White Mountains and Mount Washington, the tallest peak in the U.S. Northeast. Many racers hit this point – after a steep climb – right at sunset, which provided a reward in itself and also a promise of cooler temperatures to come.

Team Toyota Tundra was first to arrive at TA 2 and faced the navigational crux of the race, with 4 points on the swampy Northwest River obtainable by packraft only and eight checkpoints strung out along a series of 1,000-foot peaks in the Tiger Hill Forest. The team started on packraft and put together a creative route that weaved in and out of the river and involved a swim in a chest-deep lagoon.

Behind the eventual winners, a fierce battle was taking place between the eventual second-place team, Strong Machine Adventure Racing, and the third-place team, Rootstock Racing, which was also the race’s three-time defending champion. Both teams were dealing with problems caused by the heat, which drifted into the mid-80s during the day, and both chose entirely different routes through this section. Ultimately, both obtained all trekking points while foregoing the packraft section, though Strong Machine AR did so more efficiently and was able to build an advantage it didn’t relinquish for the rest of the race.

Teams emerged from the Tiger Hill section at dawn and remounted their bikes for a cruise down to the Songo Locks, a historical bridge built in 1901 that is opened by hand, which remains operational today. They then continued on to the Morgan Meadow Forest for a second trekking section containing 13 checkpoints. The only team to clear this section was Toyota Tundra, and after a final nine-mile bike ride to the finish, they cruised in for the win in 23:17:51.

Momentary Good Faith Effort took first place in the two-person mixed division with 36 checkpoints; Untamed New England won the open male category with 48 CPs, Girls Will Survive emerged victorious in open female category with 35 CPs, and Dave Lamb won the solo division with 48 CPs. Full results can be found at MaineSummerAR.com and the live-tracking from the race can be reviewed at http://live.enabledtracking.com/msa2022/.

Adventure racing photographer Legendary Randy Ericksen was on scene for the race and his photos can be viewed at the Strong Machine AR Facebook page. He also put together an overview of the highlights of the course, also viewable on Facebook.