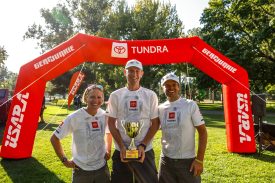 This year’s 30-hour championship race covered 115 miles between Mammoth Lakes and Bishop, California, with 38 teams completing multiple stages of biking, paddling, and trekking, including nearly 9,000 feet of climbing and 13,000 feet of descending. Toyota Tundra, the winners of the 2021 championship in Wisconsin, proved their versatility in besting a competitive field despite the thin air and higher temperatures in California.

“The race course was fantastic. It was a very technical and well-thought-out course and the higher altitude added to the difficulty,” Chandler said. “Our race plan was to ease into it at the start, put the hammer down when we could, take care of each other, and push all the way to the finish no matter what.”

Only one other team, the all-male GearJunkie squad, finished the entire course, achieving the feat in 28:12:39. With their performance, GearJunkie’s Stephen Regenold, Kyle Nossaman, and Ryan Braski won the male division championship, ahead of second-place Ibex and third-place Los Padres Locos.

The race started with a hike up the backside of Mammoth Mountain to the ski area’s summit, where teams’ bikes were pre-staged and awaiting their arrival. They then descended Mammoth’s technical downhill trails before arriving at and then kayaking across Crowley Lake. Teams then completed a grinding 3,000-foot climb to nab a series of checkpoints each located between 10,000 and 11,000 feet of altitude. The 6,000-foot descent wound around mostly singletrack before taking teams to an entrance to the Owens River Gorge, where teams dropped their bikes and descended on foot through the deep canyon, where the seven-mile section took teams five hours or more to complete. After that, all teams had to do was complete a short bike leg, a six-mile paddle on the Owens River, and a run from the take-out to downtown Bishop to cross the finish line in Bishop City Park and be considered official finishers of the race.

USARA Executive Director Michael Garrison said the race – the first national championship to take place in the U.S. West for more than a decade – achieved the organization’s primary goal of showcasing the nationwide appeal of the sport. It also revealed USARA’s ambition of making sure every USARA-sanctioned race covers epic terrain in a challenging but safe style.

“We brought the championship back to the U.S. West Coast racing community, and we brought East Coast racers out West,” he said. “The course was big, physical, and gorgeous, showcasing all that this amazing area has to offer. We also had a race director who executed a very challenging point-to-point race format flawlessly.”

The national championship was the culmination of a season that featured nearly 100 USARA-sanctioned or -affiliated races across the United States, ranging from two hours to six days in length, with thousands of racers competing on courses that required mountain biking, paddling, trail running, using only map and compass to navigate unmarked routes.

Garrison also credited the support of USARA’s 2022 headline sponsor, Toyota Tundra, and its official media partner, GearJunkie, for making the season a success and helping to grow the sport nationally. He said the 2022 USARA National Championship was the culmination of a year of relentless work to make the sport more exciting for racers and the viewing public.

“One of our most critical goals for this race was to continue to evolve and improve how we bring the sport of adventure racing to the masses,” Garrison said. “We had a dedicated media team that did a fantastic job covering the race in a way that allowed less knowledgeable race fans to follow along. We could not have executed that plan without the support of Toyota and GearJunkie.”

As the governing body of adventure racing in the United States, USARA’s mission is to ensure the enduring success of the sport by strengthening and supporting the existing community of racers, directors, and enthusiasts; creating pathways for new adventurers to enter the sport; and engaging with the greater outdoor community in the U.S. to highlight what an amazing sport it is. More information at www.USARA.com.