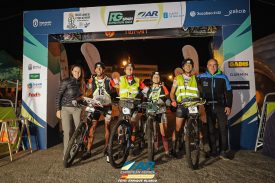 The race was hosted by Raid Gallaecia, and the same organising team which delivered last year’s Adventure Racing World Championship

/ENDURANCE SPORTSWIRE/ – After a closely fought and exciting race, where the leaders were separated by only a few minutes during 185kms of non-stop trail running, mountain biking and sea paddling, it was the FMR team from France who won the first ARWS European Championship title.

The race was hosted by Raid Gallaecia, and the same organising team which delivered last year’s World Championship once again provided a challenging and beautiful course. The route took teams through the Mariñas Coruñesas and Terras do Mandeo territory, with the race based in the historic medieval town of Betanzos.

This championship course was designed by Pablo Lopez and Jose Balseiro to test some of the best teams in Europe on a fast and technically demanding route, taking in the magnificent Cantabrian coast and Galician mountains.

Teams from Spain, France, Finland, the Netherlands, Denmark and Estonia set off from the Plaza Hermanos García Naveira in the centre of Betanzos, beginning the race with a run around the streets of the old town, before heading out into the countryside.

From the start there was a fast pace as teams ran along riverside trails and across the impressive spans of the Pedrido Bridge, to collect their kayaks for the next stage on the beach below. This 21km sea kayak was one of the highlights of the race, visiting rocky inlets and an island in the Ría de Betanzos. On a sunny and warm day, the teams enjoyed the best of the Galician coast and most were accompanied by dolphins some of the way.

Returning to Betanzos they passed through the ancient Porta da Ponte Nova and were then faced with a special abseiling test, where one member of each team descended the 72m high Romanesque Torre do Reloxo clock tower. The first mountain biking stage then took teams on a 32km route up into the hills to Oza do Rios.

In these first stages of the race, the Galician team Brigantia Adventure Race set the pace, with FMR and then another local team, Endurance, not far behind. These teams opened up their lead on the tough mountain bike climb and Brigantia set off on the next 29km mountain trekking stage with a lead of 13 minutes over FMR.

This stage was one of the toughest in the race, with 1200m of climbing, including climbs to Monte do Gato and Pico Felgar (at 503m this was the highest point of the route). While Brigantia had been stronger on the bike stage, it was now the turn of FMR to show their mountain running and navigational strength. At dusk on the summit of Pico Felgar they caught and passed Brigantia, and with smart route choices they stayed ahead of the two Galician teams as night fell.

Lucie Croissant from FMR said; “We didn’t know the competition, so we started at a pace we could maintain and were surprised to be faster than the predicted times and in second place after the first 3 stages.

“A lot of teams were near us at the start, and we had to keep up our pace and not make mistakes, which is always harder in a group. The Brigantia team was strong on the bikes and it was hard to catch them. We were going as fast as we could!”

There were still 3 more MTB stages to go in the race, and Brigantia were back in the lead after a 20km ride back to Bezantos, where teams collected the next set of maps for a 26km ride out to the Beche Reservoir. By the time they arrived there for a 7km orienteering stage there was only 7 minutes between the top 3 teams!

They opted for different routes and once again FMR regained the lead, with just a 28km ride back to the finish at Betanzos remaining. There was to be no comeback for the tired Spanish teams on the last stage. Brigantia were towing and pushing on the ride, and FMR finished strongly.

“The last foot section was orienteering and we arrived 5 minutes down,” said Croissant. “We were running faster at the end of the race than at the beginning, and didn’t see the other teams, left the last transition first and gave everything on the last bike ride. Clement, a young racer in our team, was incredible with the navigation and didn’t stop while reading the map, leading us to the finish at a strong pace.”

The FMR team of Julien Moncomble, Clement Coulon, Benjamin Coutand and Lucie Croissant crossed the finish line to win the European title after 18 hours, 25 minutes and 36 seconds of sustained, fast racing. As well as the title they won a free entry to the World Championship in South Africa next year, plus free entries to two 2023 European Series races, and a Garmin Enduro 2 watch each.

They won under the pressure of intense competition from the determined Brigantia Adventure Race team, who finished 21 minutes behind them, and team Endurance completed the podium 13 minutes later. Spanish teams were also 4th and 5th, and 9 teams managed to visit all of the checkpoints to complete the full course of a tough race.

All of the podium teams said they were looking forward to more racing in the expanded ARWS Europe Series next year, and the race closed with the presentations and prize giving in the Plaza Hermanos García Naveira.

These included an emotional presentation by ARWS CEO Heidi Muller to the retiring Race Director, Pablo Lopez Franco. This was the 8th and last Raid Gallaecia, and in that time he has helped establish and grow Spanish and Galician adventure racing, organised 5 ARWS expedition races, including one in Panama, and brought the Adventure Racing World and European Championships to his homeland in Gallaecia.

For the full results of the race, to replay the live tracking, and to see the extensive coverage of the race visit: https://raidgallaecia.com/en/live/

For more information on the Adventure Racing World Series and the ARWS European Series see www.arworldseries.com