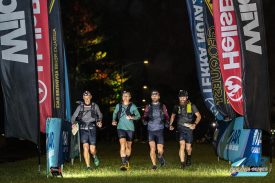 /ENDURANCE SPORTSWIRE/ The first ever Oceania Adventure Racing Championship was held at Gold Coast and in the city’s hinterland hills and parks, and it delivered an innovative and tough course, world class racing, and a weekend to remember!

The weather was the wild card, as it has been at so many adventure races this year. With heavy rain and storms predicted through the weekend some sports events were called off, but adventure racers are tough, adaptable and equip themselves for the conditions, so the race went ahead.

The winners of several past series races were in the line up, racing for the title, a place at the Adventure Racing World Championship in South Africa, and a prize pool of $10,000. They would paddle, trek and mountain bike non-stop over a 178km course, which would stay open for 36 hours. There was also a shorter course of 143km which would be open for 24 hours, and both courses started near the Aquatic Centre, which served as a comfortable race HQ.

Among the favourites on the Championship course were Alpine Avengers, 3 Points of Contact, Thunderbolt AR and Team Rogue. These teams included some of the most experienced and successful Australian adventure racers of the past decade, with lots of international and expedition race experience between them. Joining the favourites were Team Chipesti from North Queensland, who have had strong races in the past couple of years and shown their potential, without yet notching up a win.

The start for the 36 hour teams was at midnight, so getting any rest before the race was challenging, especially with the excitement and uncertainty about what lay ahead. Teams set off in kayaks towards the Nerang River, making their way through the city nightscape in a very unique start.

Luke Smyth from Chipesti said, “Paddling through the skyscrapers of the city and the million dollar houses on the canals was very different to the paddling we do back home, or in any other adventure race, and was one of my favourite stages. We had a strong paddle and made a break from the pack (or so we thought).

“We cruised into the first transition and to our surprise Alpine Avengers were already there assembling their bikes! They made a strategic move to portage their boats along the city roads on a trolley for a big section of the paddle which paid off. The race was on!”

It was, and these two teams would dispute the lead for the entire race, on a course which offered navigation challenges and tactical choices, as well as demanding endurance and strong team work.

Alpine Avengers and Chipesti swapped the lead, twice taking completely different routes on free navigation stages, but these choices didn’t separate them by much, while Thunderbolt AR stayed in a consistent third place, always close enough to be a threat if the two leaders made any mistake.

Smythe picks up the story for Chipesti. “It was a game of cat and mouse, constantly swapping positions with Alpine Avengers. We had lost some time looking for two checkpoints on Leg 7 (18km trek) so we knew we had some work to do going into Transition 4.

“Leaving the transition we started a 60km MTB leg with over 2000m of climbing! We pushed hard to catch the Avengers and make the most of the remaining hours of daylight. The last 10kms of the bike leg went through the Nerang MTB Park, with multiple checkpoints. We knew the race could be lost in the bike park, being so close to the finish and as it was the last challenging navigation in the race. With some extra serves of caffeine we worked our way through picking up the checkpoints.

“To our relief we rolled into the final transition still in the lead! We quickly packed our bikes and jumped into the boats. The remaining legs to the finish were an 11km paddle and 7km beach run. We knew the teams behind us were all seasoned athletes and not going to let us get away easily, so we knuckled down and emptied the tanks, leaving nothing to chance to cross the finish line and take the win!”

Their winning time to take the title of the first Adventure Racing World Series Oceania Champions was 24 hours 36 minutes 55 seconds, and after the win the team posted on Facebook; “Feels so good to finally pull off a win in the adventure racing scene! Bring on South Africa!”

Only the top 4 mixed teams and the male pair, Team RUSH, completed the full 36 hour course, getting all of the checkpoints, and the Vortex Divas were the only all female team to cross the finish line.

Team captain Liz Woodgate said, “We always knew the Oceania Champs would be a hard race, and it delivered, but at no point did we think of quitting. That’s just not in our nature and I’m super proud of this tough, resilient, thoughtful and upbeat group of women we call Divas.”

The 24 hour race experienced the worst of the weather, and all of the teams had to miss some checkpoints.

Six male pairs managed to finish the 24 hour course, lead by team Pair of Kooks, and the Premier Mixed class winners were team Crazed Curlews Kooky Kiwi, even though they crossed the finish line last, after more than 23 hours of racing in torrential rain.

They put their success down to good navigation (by Mitchell Krome), strong team work, and being able to make changes to their plan on the fly. Tara Hassan commented. “I think we managed to pick just the right amount of course to do to still make it to the finish inside the cut-offs and on the (mostly) intended route.”

The only female pair to finish were the experienced racers Jan Leverton and Kim Beckinsale, who raced as ‘Mountain Designs Vintage Wild Women’. When asked what got them to the finish Beckinsale said’; “Persistence, a positive outlook, having and carrying the right gear, and the navigation skills to find the checkpoints I guess.”

You can find the full results and information about other Wild and Co. races at https://www.wldnco.com

Race photographs and reports can be found on the Wild&Co Facebook page at https://www.facebook.com/wldnco

For a full calendar for the 2023 ARWS Oceania Series see; https://www.wldnco.com/arws-oceania-series. The next ARWS Oceania Championship is scheduled for 27-29th October 2023.

The next race in the series is the Alpine Quest 48 hour race, starting on November 10th and organised by https://adventurejunkie.com.au