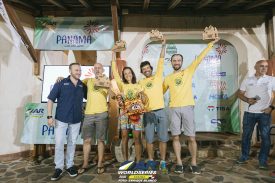 /ENDURANCE SPORTSWIRE/ – A new year of competition in the Adventure Racing World Series began in Panama last week, with the launch of a new race, in a spectacular new location.

AR Panama is the latest AR World Series race, and was launched with the backing of the tourism authorities in a country which has a growing reputation for outdoors and sports tourism.  An expedition adventure race, in which international teams raced for 6 days, non-stop, over a 516km course, was the perfect way for them to  show what Panama has to offer.

The course began with the ascent of Volcan Baru (3474m), an active volcano and the highest point in Panama, where on a good day you can see both the Pacific and Atlantic oceans. It continued with trekking and mountain biking stages down to the coast, including a 300’ abseil at the site of the Chorcha Waterfall.

The course then followed the Pacific coast of Panama and included two kayaking stages along the coast, though these had to be cut short due to unusually high winds.  All of the teams experienced some of the paddling, passing through mangrove forest to reach the ocean in a sheltered bay protected by islands.

Panama has over 3000 miles of coastline, so there was much more coast to explore on bike and foot still.  The route followed the shore of the Azuero Peninsula, firstly with a 70km trek around the Parque Nacional Cerra Hoya and then a final 118km ride, which included a boat ride to and from the island of Isla Canas where teams enjoyed a straight 14km, palm fringed, beach ride.  The race finished in the relaxed fishing town and resort of Pedasi.

Twenty two teams, with racers from 17 nations, lined up on the start line near the town of Volcan, including the ARWS world #1 team ‘Torpedo Vidaraid’ (Spain), and 4 other top 10 teams from Poland, Ecuador, Brazil and Estonia.

There was one Panamanian team, Aventureros 507, which included the youngest racer, 24 year old July Jiminez, while the oldest competitor was 66 year old Gustavo Arango from Colombia.

After a close race, it was ‘Team Brazil Multisport’ who were the first ever Panama AR winners, ahead of ‘Team Estonia ACE Adventure/La Sportiva’, with ‘Torpedo Vidaraid’ in third.  These teams shared the $25,000 in prize money.

Brazil Multisport came into the race after winning the ARWS South American title only last month at the Vulcania AR in Chile, and raced with the same team of Camila Nicolau, Guilherme Pahl, Jonas Junckes and Nick Gracie.

They are also champions at the Patagonia Raid in Argentina and Expedicion Guarani in Paraguay, which will host the Adventure Racing World Championships in September, and they will be one of the favourites there.  It’s a race Gracie has won 5 times before, and he was also a World Champion back in 2009, winning in Portugal with a British team.  (ARWS rules require 3 of the team to be of the same nationality.)

Speaking after their win he emphasised how the experience of the team contributed to the win.  “We know it would be really hot, so we arrived a couple of days early to enjoy Panama City and for me to acclimatise,” he said.

“A hot race is to our advantage, as coming from Brazil the others are used to it, and they help me.  We dive into every river we pass to cool off, and buy ice and cold drinks anywhere we can along the way.  Even so, I’m on the edge and it’s uncomfortable, but we manage.”

He added, “We didn’t race at full speed on the long volcano descent even though the track down was runnable.  The French team passed us at top speed, like it was a 10k race, but we were conservative.  Then on the next bike ride a lot of teams had crashes, but we used our experience and took it easy and had no problems.  We knew we could gain a minute or two on a descent if we went quicker, but that could risk losing the race.  It wasn’t worth it.”  With the help of some smart night navigation they took the lead by the end of that stage, and didn’t relinquish it.

At the finish line he said, “I was really impressed. It was a race with a Latin passion and experienced ARWS organisers, and together they made it special.  Everyone we met was very friendly, and Panama has loads of potential. It’s beautiful and varied and in the countryside is quite undeveloped, so it’s a great place to explore.  I’d never have thought of coming here but for the race, but now I’m really glad I did!”

Brazil has one of the biggest AR Federations and race programmes in the world and had 4 teams in the top 10 in Panama.  Guillaume Habouzit of the 4th placed ‘Tubaina’ team said, “With a strong federation and the example of Team Brazil Multisport we can race regularly and against the best, and improve our performance.”

He added, “AR Panama was a great race and provided magical moments which only adventure racing can do.  We started the last ride at sunset on a beach and finished at sunrise on another one, and had an island crossing in between, with a short boat transfer, on which we could enjoy looking up at the stars!”

Expedition adventure racing also allows teams time to complete the race if they have the resolve to continue, and the novice Panamanian team did. They crossed the finish line in last place and got the biggest welcome of all on the main street of Pedasi.  There was an excited crowd, firecrackers were going off and the finish line beer was flowing.

The team captain, Juan de Dios Aizpurua said, “It is very difficult to describe the experience and there were many difficult moments, but the most important thing was to live the experience.  We swam rivers, ran along beaches and got into caves.  We had physical problems and many bike crashes, and our backpacks weighed us down, but the whole race was a happy experience.”

The team said they found the navigation difficult but after every setback they dusted themselves down and kept going, right to the finish line, where they were astonished and overwhelmed by their reception.

They were cheered by all the teams at the race presentation as well, where Fernando Fondevila, General Director of PROMTUR (Visit Panama), told all of the teams; “We wanted to show the natural beauty that Panama has as a sustainable destination.  In the ten days that you have been in our country, we have been allowed to pass on that message.  Thank you for believing in us!”

You can find the full results and links to the satellite tracking, and extensive TV and social media coverage from the race at www.arpanama.com

Images of the race which are free for editorial use with this release only are available from; https://drive.google.com/drive/folders/1coFM7SzLh48Nmu549-7DEqr4IUPApow2?usp=sharing   Full credits must be given.

The next race in the Adventure Racing World Series is Expedition Africa, which takes place in the Lesotho, ‘The Kingdom in the Sky’.  The landlocked, high altitude African Kingdom will offer teams another unique adventure and starts on March 31st.   See www.expafrica.net for more information.

About The Adventure Racing World Series

The Adventure Racing World Series is an association of 50 races across 5 continents and 25 countries.  The series supports world-class, international, expedition races, which are the pinnacle of the world’s toughest sport, and the development of professionally organised racing at a national level through the ARWS Regional series.

Each Regional Series has its own ranking and championship final, and the ranking points feed through into the global ARWS ranking.  The winners of the annual Regional Championship receive a paid-for place at the next Adventure Racing World Championships.