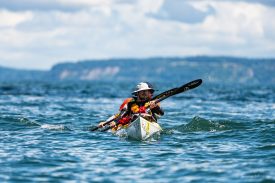 The inaugural event will send teams on a 250km island-hopping, swim-run adventure

Bend, Oregon (January 25, 2022) /ENDURANCE SPORTSWIRE/ – With nearly two decades of experience under his belt, Jason Magness has earned a reputation as one of the toughest and most savvy adventure racers in the world. This summer he will put his tenacity and experience to the test as he captains Team Bend Racing in Sweden’s daunting One Water Race, a challenging swim-run event with a purpose grounded in sustainable tourism and climate activation.

In the inaugural One Water Race, scheduled for Aug. 23-25, co-ed teams of three will test their mettle running, swimming and navigating non-stop for 250km through the Stockholm Archipelago while a fourth team member monitors and supports the team from a boat. It boasts a $100,000 prize purse, but it’s only open to 10 elite-level teams from around the world

The team will also include the husband-wife team of Brent Molsberry and Annie Hewlett-Molsberry, as well as Magness’ twin brother, Andy Magness. They’re all accomplished adventure athletes with strong swimming and expedition racing skills and have a good understanding of the massive challenge that awaits them.

“I am super excited to be able to visit the Stockholm Archipelago and experience the Swedish culture,” Magness says. “To be admitted into this event alongside some of the best and most tenacious ultra-endurance athletes on the planet is mindblowing. And having the messaging around the event stand for something greater than just racing is an even bigger honor. It will make it all the more important to push through the suffering out there and struggle to the finish line.”

Teams will race non-stop through the Stockholm Archipelago — one of the largest island chains in the world — from Arholma in the north to Landsort in the south, a distance over water and land equal to six marathons end-to-end. Competitors will need strong swimming, running, and orienteering skills, as well as the ability to adapt to cold, windy weather, choppy waters, sleep deprivation, and variable coastal terrain.

Aside from swimming strength and navigational prowess, Magness figures teamwork and temperature management will be among the biggest keys to success.

“There are so many unknowns going into this event — sleep deprivation, night swimming, route choice, tides, and swells, just so many things to manage,” he says. “Anytime I see an event that makes me wonder ‘Is this even possible?’ I get a little bit excited and scared. I am thinking of it more like a traditional expedition adventure race, but with the thought that it is an especially brutal and sadistic stage dreamed up by a crazy race director. And I love the opportunity to see if it is possible.”

In 2021, Magness, after undergoing a successful hip reconstruction surgery, led Team Bend Racing to a fourth-place finish at the USARA Nationals in Wisconsin and a resounding victory at Expedition Canada, a four-day, 360-mile Adventure Racing World Series event through the wild terrain near Penticton, British Columbia. He also teamed with Daniel Staudigel to win the WA360, a 360-mile paddling race in Washington’s Puget Sound in May. In 2022, Magness and Staudigel are planning to race the Yukon 1000, a 1,000-mile paddling race that starts in Canada, goes north of the Arctic Circle and finishes in Alaska.

Magness will also lead Team Bend Racing as it heads to Expedition Panama in February, Expedition Canada in June, the USARA Nationals in July and the AR World Championships in Paraguay in September. In the meantime, he is also serving as race director for Team Bend Racing’s annual multi-day race Expedition Oregon for international teams May 7-15 in Bend, Oregon.

Team Bend Racing is ranked No. 24 in the world in the AR World Rankings as of mid-January, the highest position of any North American team.

Jason and Chelsey Magness built their relationship on a shared passion for adventure. As professional multi-sport athletes, teachers, and coaches, they help thousands of students every year at live workshops, elite training camps, and online at bendracing.com and jandctraining.com. As part of Team Bend Racing, they travel the globe, competing in some of the toughest races on earth, battling rugged conditions, and exploring the edge of human potential. Whether racing across remote icebergs, practicing acro yoga, or balancing on a slackline a thousand feet above the ground, they’ve learned to train the mind and body to surpass limits and take life to the next level.