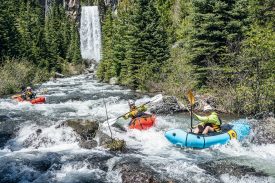 Bend, OR (November 2, 2021) /ENDURANCE SPORTSWIRE/ – After a year away without competing much due to the Covid-19 pandemic, Team Bend Racing – including founders Chelsey and Jason Magness – returned to action in 2021, and results have affirmed their position as one of the top adventure racing teams in the world while solidifying their reputation as “America’s Toughest Team.”

Composed of a group of strong, fit, savvy and multi-skilled endurance athletes, Oregon-based Team Bend Racing (TBR) has been achieving success in both domestic and international races for more than 15 years. In the span of a week this fall, two different editions of the team turned in strong performances in multi-day international races: a resounding victory at Expedition Canada, an Adventure Racing World Series event in Penticton, Canada; and 24th-place – and top US team – in the 2021 Adventure Racing World Championships in Spain.

Other 2021 TBR highlights included a fourth-place finish at the USARA Nationals, Jason Magness and Staudigel winning the WA360, a 360-mile paddling race in Washington’s Puget Sound in May, and Chelsey Magness winning the women’s title at the Wembo Americas Solo 24-Hour Mountain Bike Championships in Oregon in July.

TBR is ranked No. 20 in the world in the AR World Rankings as of mid-October, the highest position of any North American team. The team is looking forward to racing in Panama, Canada and Paraguay in 2022, and is already planning for their own annual race, the multi-day Expedition Oregon, next May in Bend, Oregon.

“This whole year has been amazing,” says team captain Jason Magness, who competed this year after a second hip-resurfacing surgery in February. “It’s been pretty inspiring to see people racing again and being back in the community and doing what we love. And for each of us and for our team to be back out there competing so well, it just makes us grateful for the opportunities we have to continue doing the sports we love.”

The recent World Championships was a grueling seven-stage, 610km (380-mile) race that included sections of trekking, mountain biking, sea kayaking, river paddling, coasteering and rappelling. Although Team Bend Racing had to make a last-minute replacement days before the race began, the foursome of Chelsey Magness, Daniel Staudigel, Lars Bukkehave and Darren Steinbach used their collective teamwork and tenacity to finish as the top American team, arriving at the finishing line after five days, 16 hours and 56 minutes of racing. Only 44 of the 90 teams in the field finished the full race course.

“It speaks to our experience as a team and the character of each individual, being able to adapt at a sudden change and still have the tenacity and the confidence to still go for it and do as well as we did,” Chelsey adds.

A week before the AR World Championships, Jason Magness, Alex Provost, Karine Corbeil and Jean Yves Dionne tackled the Sept. 22-26 Expedition Canada, a 580km (360-mile) race in British Columbia. TBR battled rain, wind, snow at high elevations and choppy waters during the 16-stage event which included numerous trekking and trail running, orienteering, mountain biking, ascending and rappelling ropes and packraft and canoe paddling, as well as a short stand-up paddling section. But they set themselves apart from the top three teams early in the race, staying fast and efficient over short sections while constantly changing disciplines which defined this year’s course. This aggressive racing style led to a commanding win with a six-hour margin in 61 hours, 28 minutes, marking the team’s first AR World Series victory.

Jason and Chelsey Magness built their relationship on a shared passion for adventure. As professional multi-sport athletes, teachers, and coaches, they help thousands of students every year at live workshops, elite training camps, and online at bendracing.com and jandctraining.com. As part of Team Bend Racing, they travel the globe, competing in some of the toughest races on earth, battling rugged conditions, and exploring the edge of human potential. Whether racing across remote icebergs, practicing acro yoga, or balancing on a slackline a thousand feet above the ground, they’ve learned to train the mind and body to surpass limits and take life to the next level.