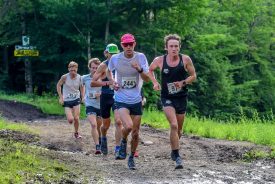 /ENDURANCE SPORTSWIRE/ – After last year’s championships event was hosted by the Gnar Gnar on Mt Hood in Oregon, the USATF Mountain Running Championship returned to the “Beast Coast” to be hosted by the Whiteface Mountain Races in the Adirondack Mountains of New York State. Perfect racing weather set the scene under a blue sky, with low wind and start time temperatures in the high 50s at the base of Whiteface Mountain. Whiteface hosted the alpine skiing events at the 1980 Winter Olympic Games and is home to the biggest vertical drop of any ski area in the Northeast U.S. Forty-two years ago skiers raced down the 3000-foot vertical drop but yesterday America’s top mountain runners ran up and down the mountain on a 6.4 mile “rolling” course with 3700 feet of climb and descent.

On the way down the mountain it was “game on” for the final 3.6 miles which featured a pair of lung-sapping 250 foot climbs. Laukli led the way but briefly went off course allowing Hemming, Tomajczyk and Patterson to sneak past. Hemming yelled out to help Laukli get back on course but some time was lost as she fought to make back places. “The first half of the race was really good on the way up, until I lost some time with a wrong turn, but I’ve been trying to improve my downhills,” said Laukli.

Hemming used her experience from the 2013 and 2014 World Mountain Running Championships stretch her lead on the descent winning her first USATF Mountain Running Championship by over one minute to finish in 1:25:27. One year older and one year wiser, Tomajczyk used her knowledge of mountain running from last year’s up/down championship on Mt Hood to glide home in 2nd place in 1:26:42. This was Tomajczyk’s second 2nd place at the USATF Mountain Running Championship. Laukli wasn’t able to claw back all her lost time but did run strong to finish in 3rd place. About the course and mountain running Laukli said, “It was a crazy, gnarly course but really fun. There’s a lot of crossover [with Nordic skiing], I can really grind the uphills and we do a lot of trail running for training so I’m familiar with technical trails.”

About the Whiteface Mountain Race Hemming said, “It’s one of the hardest, steepest courses I’ve ever run. I hope more people return back to mountain running after college cause it’s so much fun and great scene.”

Tabor Hemming (formerly Scholl) cut her mountain running teeth as a junior when she was named to the US Mountain Running Team in and 2013 and 2014. In 2014 she finished 35th in the junior race at the World Mountain Running Championships in Casette di Massa, Italy helping her team win the silver medal.

Rachel Tomajczyk earned a spot on last year’s US Mountain Running Team but had to re-qualify this year when the 2021 world championships were postponed until November 2022. About the Whiteface Mountain Race Tomajczyk said, “It was really fun, the steepest race I’ve done and the views were beautiful. I felt good today, liked the downhill and it was really fun get going quick. It means a lot for me to qualify for Thailand. Any time you can make a world team it’s special and we have a great team this year.”

The top masters’ finisher in the women’s race was Cheryl Anderson (Madison, CT) who finished in 1:46:05.

Without defending national champion and two-time World Mountain Running Champion Joseph Gray on the start line, the race would be wide open for a new champion to be crowned from among a talented field of new and experienced athletes. The men’s field burst off the start line led by 7-time US Mountain Running Team member Andy Wacker.

At the high-point it was Way Too Cool 50K runner-up Eli Hemming and 2021 US Mountain Running Team member Joseph DeMoor in the lead. A few seconds back were Morgan Elliott and Wacker. “Climbs have been a struggle but I knew my downhill would be strong,” said Wacker. Steven Kerr (Greenfield, MA) and Dan Curtis rounded the top of the course in 5th and 6th.

As happened in the women’s race, the steep Olympic downhill would shake up the men’s running order. A veteran of two previous up/down USATF Mountain Running Championships, DeMoor used his experience and strength to gain a lead on the way down. DeMoor would be stalked by Wacker and Hemming. According to Wacker, “I felt a lot of pressure to be in the top 3 to make the U.S. team and pulled into second on the descent. It was a battle between me and Eli all the way down; Eli passed me back on the two short uphills and I would pass him on the steep downhill sections.”

At some point on the descent DeMoor really began to struggle. Pushing himself to the limit he collapsed just a hundred yards from the finish where he was attended to by paramedics. Fortunately DeMoor would be ok but had to accept a DNF.

In his battle with Hemming, Wacker would use his superior technical downhill running skills to prevail and win his first USATF Mountain Running Championship in 1:07:31. Hemming finished 2nd just 16 seconds back in 1:07:47. Salida, Colorado’s Elliot stretched his gap to finish in 3rd place in 1:10:35.

A former USATF 1/2 Marathon Trail Champion, Andy Wacker’s mountain running win earns him a spot on his 15th U.S. national team. About his victory and what it means to make the 2022 US Mountain Running Team Wacker said, “Oh man, it’s hard to explain, this means so much to me. My main goal is to represent the US [at the world championships] and the depth of our team this year is really good. My goal for Thailand is for our team to medal and personally I’m looking for a top 10 but the team does comes first. My favorite part of Whiteface was the technical mossy downhill under a chair lift; it was soft and funky!”

Race images by Michael Scott are on Google Photos.

Full race results are available on the Underdog Timing website.

USATF results including all age groups are HERE,