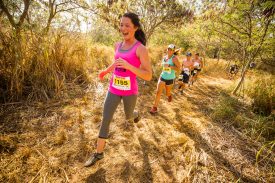 T S Restaurants’ Hula Grill, Duke’s Beach House, Kimo’s and Leilani’s will serve as title sponsors of the XTERRA Kapalua Trail Runs on the island of Maui on Saturday, December 4, 2021. Adding to the lineup and new this year is the XTERRA Trail Run World Championship 21K.

Kapalua, Maui (November 4, 2021) – T S Restaurants’ Hula Grill, Duke’s Beach House, Kimo’s and Leilani’s will serve as title sponsors of the XTERRA Kapalua Trail Runs on the island of Maui on Saturday, December 4, 2021. Adding to the lineup and new this year is the XTERRA Trail Run World Championship 21K.

With five runs to choose from and world titles on the line there is a distance and challenge for every member of the family. Runners can choose to go big in the challenging half-marathon or start small with Kimo’s XTERRA Keiki K, Leilani’s XTERRA 3.3K Scramble.  For those in between, there’s the Hula Grill XTERRA 5K or Duke’s Beach House XTERRA 10K trail runs.

Held in conjunction with the 25th XTERRA World Championship off-road triathlon, the Kapalua trail runs are an opportunity for outdoor enthusiasts of all ages and skill levels to get involved and experience the legendary XTERRA run course.

The Kimo’s XTERRA Keiki Run is for boys and girls ages 10 and younger. It is free, although parents must be present to sign a waiver form at the site of the race. Race distances vary from 100 yards to 1-kilometer, depending on the age of the child. Parents are welcome to stay on the course as well.

The Leilani’s XTERRA 3.3K Scramble is a test of agility, speed, and strength as it goes from the Ritz to the Ravine to the soft sand of D.T. Fleming Beach.

The Hula Grill XTERRA 5K is an honest three-miles of climbing and descending and for those up to the challenge, the Duke’s Beach House XTERRA 10K dishes out big hills and dusty trails as it twists through oleander forests to an unexpected mountain lake at the 700-foot level then sends runners crashing down to the shoreline.

The XTERRA Trail Run World Championship, which was held on the island of Oahu for 12 years, will be taking place in Kapalua for the first time on a thrilling new course that navigates forest trails, pineapple fields, and ridgelines high above the northwest coast.

“They are all awesome races, and the vibe around The Ritz-Carlton rocks on Saturday morning,” said XTERRA President, Janet Clark.

A max capacity field of 1,000 runners are expected to take part in one of the five events. All runners are required to show proof of vaccine or a negative test to compete, as are the spectators who are limited to friends, family, and travel partners of event participants.

There is also an internal struggle going on, as employees from T S Restaurants created a race within a race dubbed “The T S Restaurants XTERRA Challenge” in which each restaurant fields a team of 10 employee 5K runners; and the team with the fastest cumulative time from their quickest five runners take home the coveted T S Trophy.  Hula Grill has won it four-times, Kimo’s three times, and Duke’s the inaugural event.

The restaurants will also compete for the title of “Fittest Restaurant” – given to the establishment who has the most participants per restaurant volume. That also went to Hula Grill in 2019, Duke’s won it in 2018, and Hula Grill captured the inaugural challenge in 2017. This is the 10th year T S Restaurants has supported XTERRA Worlds.

“It’s all about celebrating the healthy, active, outdoors lifestyle with our employees and our community, in a covid-safe way” said Scot McGill, Corporate Chef for T S Restaurants and XTERRA triathlon racer himself.

Hula Grill, Duke’s Beach House, Kimo’s and Leilani’s are four of Maui’s finest restaurants, and all are located within a short driving distance of Kapalua.

“The unique feeling and setting of West Maui is exhibited at each of these four restaurants, and it is in keeping with what the XTERRA athletes and their families have come to expect when they get to the island of Maui,” XTERRA President Clark said. “Dining at any, or all, of these restaurants can only enhance the experience for our athletes, whether it be eating a pre-race meal or celebrating with a post-race meal.”

About T S Restaurants of Hawaii and California