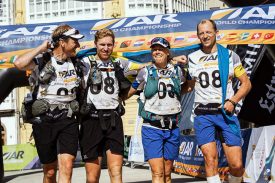 /ENDURANCE SPORTSWIRE/ – The recent revision of the Adventure Racing World Series rankings saw a new World #1 team announced, improved positions for South American teams, and a significant effect from the Regional rankings around the world.  The top 20 also shows a healthy mix of nationalities, with 10 different nationalities from 4 continents in the top 13 places.

The rankings, which have been continuously maintained by the ARWS for the past decade, are designed to recognise the achievements of all competing teams, and the excellence of the elite teams, who all aim to be the world’s #1 endurance racers.  They reward participation too, encouraging teams to race as often as they can, and with the introduction of the regional rankings, which feed into World Series rankings, they offer teams a pathway into the elite level of international adventure racing.  Since they began, ARWS rankings have been recorded for over 1800 teams.

The latest update included races from the previous 4 months (not including the recent Expedition Africa),  and the Swedish Armed Forces Adventure Team (SAFAT) took over the #1 position from Torpedo Vidaraid (Spain).  The Swedish team has not raced since winning the World Championships in Spain last October, and only score points from 3 races (4 can count), but their total of 4000 points was enough to claim the top spot.

The Adventure Racing World Champs scores double points, and that title win, and two wins at the Nordic Islands Adventure Race, mean they are the first team since Avaya (NZ) to hold both the World title and #1 rank.  It is the first time a Swedish team has been world number one since 2019 (then it was Orbital Adventure Racing) and is the fulfilment of a long held ambition for team captain John Karlsson who said, “Ranked as number 1 in the world!  It finally happened!  We did it together after 20 years with one goal!”  All of the team, which was established in 2014, are serving soldiers, and SAFAT is a project supported by the Swedish Army.

The team are next due to race at Adventure Race Croatia in May and Karlsson said, “Our race preparations have begun and we look forward to an intense race.  That we, for the first time, get there as number one in the world rankings feels extra special.”

Torpedo Vidaraid competed in the first ARWS race of the year, the Panama AR, finishing in 3rd place.  However, this meant a reduction in their points total as the rolling cycle of races which are counted removed a previous win, and they ended up just 10 points below SAFAT.  (Points counted only go back for two years or 6 ranking cycles).

The winners at Panama AR were Team Brazil Multisport, and that victory came after they had won the first ever ARWS South American Regional Championships at the Vulcania AR in Chile.  The inclusion of those two results propelled the Brazilian team up to #3 in the rankings, the highest position a Brazilian team has ever held.  They also recently won the latest round of the Brazilian national series and are defending title holders at Expedicion Guarani, which will host the AR World Champs in September, so they have ambitions to go higher and to match the achievement of the Swedish Armed Forces Adventure Team.

Teams can include points from two regional races (Tier 2 races) in the world rankings now, as one of their 4 counting scores, and the Regional Championship races carry the same points as a full World Series race.  So, Brazil Multisport effectively took two wins into the latest rankings update.

The inclusion of regional race scores is starting to have a significant impact on the rankings, and this will increase through the year as more regional races take place.  In the current ranking cycle six of the top 20 teams included regional race points, moving them much further up the World rankings than they might otherwise have been.

Among these teams were Alpine Avengers (Aus) who included 1000 points for wins at the Terra Nova and Hells Bells races in the Oceania series, Brou Adventures (Brazil), who included 1150 points for scores at the Vulcania AR and Desafio Eco-Trail from the South America series, and Team Jabberwock (RSA) for results in the Africa Series.  Teams take note – regional race points WILL also boost your world ranking!

The stand-alone regional ranking tables are also updated at the same time as the World Rankings and these currently included South America, Oceania, and Africa.  Teams can check their position in their own region and see how they compare with others, as well as qualify for the regional final, where a place at the Adventure Racing World Champs is at stake.

Not surprisingly, Brazil Multisport are the #1 team in South America, in Africa it’s team Merrell Songlines, while in Oceania its Alpine Avengers who are the top ranked team.  You won’t necessarily see some of the world top 10 teams in the regional rankings, if they’ve not raced a regional event they won’t get a rank in their region!

Later in the year the ARWS Europe and Asia regional series will also start, allowing teams in those areas to win regional ranking points and carry them into the World Rankings.  (There has already been one Asia race, the Namma AR in India.)

Within the next 4 month ranking cycle (up to August 1st), there are also another five AR World Series races (and one Demonstration race) so the coming months will be more competitive than ever, and the next rankings revision may see a new World #1 team and will tell a new story of the performances of the world’s best adventure racing teams.

You can see the latest ARWS rankings at;