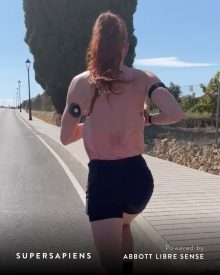 Buckingham first began competing in triathlons at eight years old. She won the National Junior Aquathon at 13 and represented Great Britain multiple times at the European Youth Triathlon Championships. She represented Team GB at the London 2012 Olympic Games and the Glasgow 2014 Commonwealth Games. In 2015, Buckingham won the European U23 Triathlon Championship. She has won European and world medals in Mixed Team Relay events, including winning the senior world title with Vicky Holland, Jonny Brownlee, and Alistair Brownlee in 2014. In 2021, she won the Challenge Family’s The Championship and more recently won Challenge St. Pölten 2022 where she set a course-record time in the women’s race.

Since starting to integrate the Supersapiens ecosystem into her training and racing, Buckingham says, “With Supersapiens, I have been able to focus on and attribute both positive and negative parts of my performance to learnable points, which is really helping make a difference to my run.”

Supersapiens develops innovative technology and insights around glucose data to help athletes to make more informed nutrition decisions around training and recovery. Supersapiens is the first energy management system designed for athletes to visualize the connection between their glucose levels, energy, and quickly learn the most beneficial intraday behavior adjustments to improve their performance and how they feel.

“We are proud to support such an inspiring athlete as Lucy. Having a Supersapiens ambassador of her caliber is a true testimonial to our system and further showcases how we are helping athletes achieve their goals,” said Supersapiens CEO and Founder Phil Southerland.

Supersapiens is aiming to be the most influential sports brand of the decade. They develop innovative insights around glucose that aim to unlock better performance and recovery by driving positive behavior changes.

The Supersapiens system including Abbott’s Libre Sense Glucose Sport Biosensor is not for sale in the U.S and is only available in select countries. For a full list of references and FAQs, please visit our Education Hub and Knowledge Base.

View all Releases by Super Sapiens