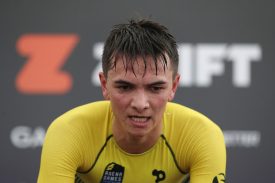 The first ever esports World Championship Series for triathlon, a mix of real life and virtual racing, took place over three events in Munich, London and Singapore in partnership with the sport’s governing body, World Triathlon, and was won by Alex Yee and Beth Potter.

Independent research from Platformation & Global MMK shows that 21.7 million people watched coverage of the Series, exposing triathlon to a mass audience via the innovative format and SLT’s deals with global broadcasters.

The coverage aired in 136 countries and had more than 9,000 broadcast hours with close to half coming from the key markets of Europe and North America, and delivering a media value of more than €94 million.

The broadcast numbers do not include the significant footprint of the event across Super League’s digital channels, and comes as further research shows that SLT now has more than 1 million followers on owned social media and access to more than 22 million followers through its affiliated channels.

Super League Triathlon CEO, Michael D’hulst, said: “Our aim at Super League Triathlon has always been to make triathlon a spectator sport, and we have the proof that we are doing just that. Our unique formats, incredible athletes and increasing broadcast footprint are exposing more people to triathlon than ever before. To think that a triathlon series could have been viewed by more than 21 million people across the world is the kind of thing that has not been possible until Super League Triathlon came and moved the dial. I am confident that we will continue to grow these numbers as we already have very promising conversations with further broadcasters.”