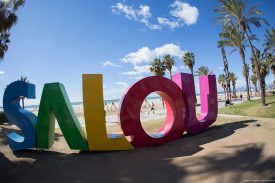 It’s a battle of the nations this weekend at CHALLENGESALOU. A 40-strong pro field from 14 nations will line up on the shores of the Mediterranean.

It’s a battle of the nations this weekend at CHALLENGESALOU. A 40-strong pro field from 14 nations will line up on the shores of the Mediterranean alongside over 500 age group athletes to take on the sixth edition of the 113km Catalonian race.

In the men’s field, will it be the battle of the Kiwis with New Zealanders Braden Currie and Kyle Smith? The two had a hard-fought battle for victory at CHALLENGEWANAKA earlier this year with Smith coming out on top but just four weeks later, Currie had the upper hand winning IM New Zealand ahead of Smith’s third. One man who’ll be keen to ruin the Southern Hemisphere party is German uber biker, Frederik Funk. With wins this year at CHALLENGESTPÖLTEN and the European Triathlon Championships at CHALLENGEKAISERWINKL-WALCHSEE and a third at THECHAMPIONSHIP where he owned the bike with a 1:54:39, the fast flat Salou bike course will suit him well. Add the likes of Collin Chartier (USA), Pablo Dapena (ESP) and Thomas Davis (GBR) into the mix and we can look forward to some exciting racing on 3 October.

The women’s race will see THECHAMPIONSHIP champion, Lucy Hall (GBR) and runner-up, Sara Perez Sala (ESP) meet again but there’s no way it will be a two-woman race. Emma Bilham (SUI) favours tough, demanding courses with two wins at Alpe d’Huez under her belt but there is no doubt she’ll be in the mix on this fast flat course. Olympian, Lisa Norden (SWE) is also a strong contender, and she has some unfinished racing against Hall and Perez Sala after THECHAMPIONSHIP. Finally, add the up-and-coming Australian, Chloe Lane, to the mix and again, we have an interesting race on our hands. Lane took fourth at DATEV CHALLENGEROTH and has raced twice since in Nice and Aix-en-Provence 70.3s, taking second in Aix.

CHALLENGESALOU takes place on Sunday 3 October with the male pro race starting at 8:00am and the female pro race at 8:15am. Follow the livestream in Spanish and English at www.challenge-family.live along with live race updates on Twitter @ChallengeFamily. For further information, visit www.challenge-salou.com/en