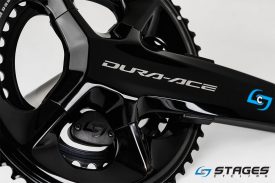 In December, Stages began offering Factory Installed Dura-Ace R9200 and Ultegra R8100 power meters as single-sided, non-drive side Stages L units only, which is the same technology ridden to countless professional wins including Tadej Pogacar’s 2020 Tour de France victory. The drive-side Stages R crank arms and dual-sided Stages LR cranksets for Shimano’s 12-speed groups feature a new power meter design and are on display at Eurobike this week. Units will be available to purchase in Fall 2022.

Like all Stages Power meters, these new Dura-Ace and Ultegra units are built and individually calibrated in Boulder, Colorado to the same exacting standards of performance, accuracy and reliability as the rest of their product line, including the Stages Bike SB20 Smart Bike and models found in some of the biggest indoor cycling studios.

“We’re excited to offer a dual-sided Stages Power meter on the latest Shimano crankset,” said Pat Warner, Senior Vice President of Product Development. “Our top priority is providing cutting edge technology to help cyclists achieve their goals. These new models add to the many tools Stages has to offer.”

Customers who have already purchased a Stages Power meter for R9200 or R8100 will be able to purchase a drive side power meter and pair it to their existing left side to create a dual-sided unit.