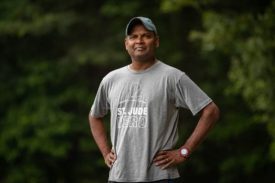 MEMPHIS, Tenn. (Nov. 1, 2021) / ENDURANCE SPORTSWIRE /– What does it take to keep St. Jude Children’s Research Hospital® running? If you’re a St. Jude Hero, that means running for a purpose for events like the St. Jude Memphis Marathon® Weekend presented by Juice Plus+®.

For years, tens of thousands of steadfast supporters pushed through every step, mile and intense hour of training and recently achieved an incredible cumulative milestone: $100 million raised in two decades through this event. Their support helps fuel the St. Jude $11.5 billion, six-year strategic plan, which includes tripling its global investment to impact the more than 400,000 kids with cancer around the world each year.

“It’s inspiring to see the difference every one of us can make for the children of today and future generations when we commit to a purpose and work together for good by raising $100 million in 20 years – one dollar, one runner at a time,” said Richard C. Shadyac Jr., President and CEO of ALSAC, the fundraising and awareness organization for St. Jude Children’s Research Hospital. “Childhood cancer is a multi-trillion-dollar, multi-year problem and fundraising through annual events like the St. Jude Memphis Marathon Weekend is crucial for St. Jude to continue its groundbreaking research and treatment and execute on its $11.5 billion expansion and growth plans.”

St. Jude Memphis Marathon Weekend is the largest single-day fundraising event for St. Jude. The all-virtual event raised $7.5 million in 2020. The goal for the event’s historic 20th anniversary on Saturday, Dec. 4, 2021 was set at $9 million, but St. Jude Heroes and generous donors have rallied in true hero fashion and are already on pace to surpass that goal and reach $12 million, nearly $5 million growth year over year. Because of fundraising events like this, families never receive a bill from St. Jude for treatment, travel, housing or food – because all a family should worry about is helping their child live.

St. Jude Heroes have access to online training programs and race-day extras – from a singlet to hotel accommodations, depending on the fundraising commitment – and possibly entry into the most exclusive races in the world. Runners can also earn additional prizes based on how much is raised for St. Jude kids.

Since its inception in 2002 with fewer than 3,000 participants, St. Jude Memphis Marathon Weekend has become a marquee event that not only brings families, friends, neighborhood associations, and businesses together for a purpose, but also creates global awareness around the important work that happens every day at St. Jude Children’s Research Hospital. The event has attracted up to 26,500 participants annually from Memphis and around the world. This growth is due to the continued support of local, national and worldwide supporters who share a passion for the St. Jude mission: Finding cures. Saving children.®

To ensure a safe environment for all, participants can view St. Jude Memphis Marathon Weekend health and safety protocols here. Event organizers are following the guidance of the Centers for Disease Control and Prevention and local health officials.

Achieving the $100 million milestone is cause for celebration. St. Jude Heroes and all supporters are encouraged to use the hashtags #StJudeSpirit and #StJudeHeroes on social media and post images and videos related to their St. Jude Memphis Marathon Weekend participation over the past two decades. To learn more, visit stjude.org/marathonspirit. To volunteer on race weekend, visit stjude.org/marathonvolunteer.

St. Jude Memphis Marathon Weekend marks its 20th anniversary, and the stories of five runners who have participated every year since the start are featured on St. Jude Inspire.

As a young boy in Akavidu, India, Raj Betapudi would often run with his dad around the high school track. He moved to the U.S. in the 1990s, and when he heard about the St. Jude marathon from a colleague, he felt compelled to try, realizing that through the process of training, he was weaving his past with his present. Building up for the half marathon meant overcoming what Raj calls “a mental block” of self-doubt. His breakthrough came on a treadmill at work when he ran farther than he ever had. He thought of that little boy in India running with his dad. Back then, he’d had no worries, only dreams. Raj ran his first St. Jude half marathon in 2002 and has accomplished many more since. He’s proud to have been part of the St. Jude marathon since the very beginning. “My dad had three kids. A girl, boy, and a girl, and I have the same sequence of kids, and they run. I guess this is the joy of passing (traditions) on. I think it’s just a great joy to be outside and enjoy the nature, and also challenging your body to do more than what you thought you were capable of doing and pushing the limits.”

On a December night in 2002, Miriam Dillard downed some burritos and margaritas with a friend at a Tex-Mex restaurant in Memphis. The next morning on a lark and without training, the 21-year-old biology major at Rhodes College ran her first half marathon during St. Jude Memphis Marathon Weekend. And one year later Miriam Dillard – now Miriam Dillard Stroud – became a researcher at St. Jude and embarked on the rest of her life. “Seeing it go from a tiny number of people to a huge number of people, I think it just gets more and more special,” said Miriam, who runs every year. Miriam, who as a Platinum St. Jude Hero for Team Rhodes and commits to raising at least $5,000 for St. Jude each year, has kept all her St. Jude medals, “and I don’t really hold onto race medals.” She remembers that first race in 2002 and how she strapped a portable CD player to her chest so she could listen to her mix CD as she ran. All the runners wore cotton. And no one had digital cameras yet. Her cotton shirt from 2002 “has holes in it, and I’ve had to have it sewn up multiple times because I’m like, ‘I’m not letting go of that.’”

Rich VanMeter’s muscles were aching, tired from the exertion of his 2007 St. Jude marathon, but when the St. Jude Hero looked over and saw his girlfriend Nicole Tice and her son William right where they said they would be along the route, talk about a runner’s high. Rich and Nicole had been dating several months and Nicole wasn’t a morning person, but she and William came out anyway, holding a sign William had scrawled in his little kid handwriting that said, “Go Rich!” The thought occurred to Rich: He’d never been happier. In 2002, Rich had been running with a group of guys where he worked at the Navy base in Millington, Tennessee, who wanted to be in peak shape. One of them brought up the idea of running in the new St. Jude marathon event. How could he have known it would set him on a path to the rest of his life? Rich’s running in the St. Jude marathon led to volunteering at St. Jude, which led to meeting fellow volunteer Nicole. “If I hadn’t started running the marathon that first year, then I wouldn’t have gotten into volunteering for it. …You know it all trickles down. I met Nicole, got engaged, got married, got a son, Adam – two sons, counting William, too. It’s touched every part of my life.” Rich proposed to Nicole in the lobby of Tri Delta House in 2009 on the St. Jude campus, the place they’d met as volunteers.

Keri Nunley wanted to do the St. Jude marathon for her dad. “A friend of mine was going to do it, and she said, ‘Hey, do it with me.’ And I was like, ‘Oh Lordy, I can’t run, girl.’ I was like, ‘I’ll walk.’ So I really trained. I trained and trained and trained.” It started as a way for her to wrest meaning from an incomprehensible loss. Her father died in 2001 from colon cancer. She later learned he’d been a devoted giver to St. Jude for years and directed his memorial funds there. She felt the impressions of his handwriting on the checkbook ledger as though they were inscriptions on her heart: Page after page said St. Jude. “We just never knew he donated like he did, and this is just my way to keep his donation going.” Alone as the sole member of Team Hertwig that first year — “Lord, I was so slow. I was out there all by myself.” She walked 13.1 miles, her feet aching but her spirits high. It took 3 hours and 40 minutes, but she did it. Keri walked alone that year but it was the only time she’d ever have to. After that, her family joined her, flying in from as far away as Pennsylvania, Texas, Florida and California to gather in Memphis for a family reunion of sorts, in running shoes. Today Team Hertwig boasts 35 members and raises about $30,000 each year.

St. Jude Children’s Research Hospital is leading the way the world understands, treats and defeats childhood cancer and other life-threatening diseases. Its purpose is clear: Finding cures. Saving children.® It is the only National Cancer Institute-designated Comprehensive Cancer Center devoted solely to children. Treatments invented at St. Jude have helped push the overall childhood cancer survival rate from 20% to more than 80% since the hospital opened more than 50 years ago. St. Jude won’t stop until no child dies from cancer. St. Jude freely shares the discoveries it makes, and every child saved at St. Jude means doctors and scientists worldwide can use that knowledge to save thousands more children. Families never receive a bill from St. Jude for treatment, travel, housing or food – because all a family should worry about is helping their child live. Visit St. Jude Inspire to discover powerful St. Jude stories of hope, strength, love and kindness. Join the St. Jude mission by visiting stjude.org, liking St. Jude on Facebook, following St. Jude on Twitter, Instagram and TikTok, and subscribing to its YouTube channel.