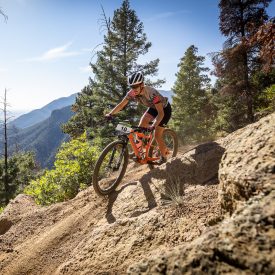 Colorado Springs, CO, September 28, 2021 – Sports Strategies announces a successful close to the 2021 Pikes Peak APEX presented by RockShox following 4 days, 120 miles of dirt and over 15,000 feet of climbing. Alexis Skarda and Keegan Swenson, both from Santa Cruz/SRAM, beat strong fields to win the overall general classification at The APEX. The men’s field featured a who’s-who of American mountain bike racing plus EF Education-Nippo riders Lachlan Morton and Alex Howes, while the women’s field ended up being a tight three-way battle between three well-known domestic pros.

Day 2 of the APEX was the first big stage with nearly 6,000 feet of climbing over 40 miles. Swenson and Amos took off mid-race during the first section of singletrack, never to be seen again. Swenson held on for the win and the GC lead with Amos right behind, followed by Finsterwald and Bear National Team rider Braden Johnson about 5 minutes back after the super-technical finish. Skarda started to take advantage of her climbing prowess by putting time into the women’s field early and holding off Dong and Gomez-Villafane at the line. Dong held on to enough time to take the GC lead from Gomez-Villafane.

Day 3 featured another long day for the riders with the queen stage on Gold Camp and Jones Park. Skarda once again put time into the other women and went over the top of Frosty Park at over 10,000 feet with a lead of several minutes. Despite a strong chase down Captain Jack’s Trail, Dong and Gomez-Villafane couldn’t catch the climber, and Skarda took the stage by over 10 minutes to put her in the driver’s seat for the GC.  Swenson continued to dominate the men’s field despite some strong attacks mid-race by Amos and just barely held on for the stage win with Finsterwald in 3rdand three-time Olympian Todd Wells in 4th.

The 4th and final day saw a shorter 20-mile stage with attacks from the gun with riders trying to mix it up. With higher speeds we saw a few more crashes with Alex Howes clipping a tree and breaking a finger and Sofia Gomez-Villafane putting a gash in her knee. While Gomez-Villafane was able to finish and get stitches in her knee immediately by the Centura Health Medical Team, Howes was unable to finish the stage. Skarda put her final stamp on the race by winning her third stage in a row and Swenson made it a sweep by winning Stage 4.

Both Swenson and Skarda took the overall GC by winning on RockShox forks on the exact trails that SRAM tests their products on every day at their research and development facility here in Colorado Springs.

Immediately following at the APEX Awards & After Party co-hosted by Springs Wealth Group over $38,000 in cash and prizes was distributed to winners in the pro/open and age group categories. The APEX pays out equally to men and women 15 deep each in the pro/open category and distributes prizes equally to 1st, 2nd and 3rd place men and women, each across 5 age categories. All results can be found on PikesPeakAPEX.com

The second annual Pikes Peak APEX presented by RockShox was held September 23-26, 2021. This unique, four-day mountain bike challenge draws pros and amateurs for four days of riding on the slopes of Pikes Peak in Olympic City, USA. Riders experience exhilarating, exceptionally crafted routes through dirt roads, jeep trails and the amazing alpine singletrack that is quintessential Pikes Peak. The world-class event supports Trail Stewardship and drives economic impact to the area in order to improve the trails and open space in the Pikes Peak region for the lasting enjoyment of its residents and visitors. The APEX, a Pikes Peak Outdoor Recreation Alliance project, was developed and is operated by Sports Strategies, a division of Tourism Strategies, LLC. For more information about the event, visit www.pikespeakapex.com.

View all Releases by Sports Strategies