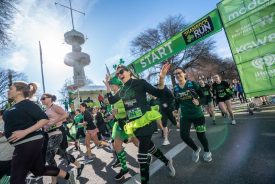 Opening day of running season was canceled in 2020 and held virtually in 2021 due to the COVID-19 pandemic. Annual Spring tradition returns for the 44th year with a live, in-person event on Sunday, March 13, 2022.

PORTLAND, Ore. – March 4, 2022 /ENDURANCE SPORTSWIRE/ – For those who love lacing up their running shoes and pounding the pavement, imagine Beantown minus the Boston Marathon. Think of the Big Apple missing the New York City Marathon.

For two years, that’s what it’s been like for the Portland running community after COVID canceled Oregon’s biggest running event, Shamrock Run Portland.

Greg Pressler, who has lived in Portland for 32 years, who raced the event at least a half dozen times and has served as race announcer for more than two decades, knows how important Shamrock Run Portland has been to the community.

“I think it’s only when traditions are forcibly taken away do we realize how important those traditions are,” said Pressler. “Yeah, it’s a running event held on a Sunday morning in March.

That’s nice. But beyond that, when those traditions are taken away, you realize how important they are not just to the running community but to the whole fabric of the community at large.”

The event was founded by Steve Hamilton in 1979. Hamilton worked for his parents’ athletic store, saw how the running boom was exploding, saw Steve Prefontaine and Frank Shorter capture the public’s fascination, saw a St. Patrick’s Day run take off in Springfield Ore., and figured, “Why not Portland?”

Portland became a running mecca with Nike headquartered just outside the city in Beaverton and Adidas located in the city. Runners descended upon Portland and Eugene to train and race.

In 2020, with tents set up near the start, the event was canceled because of COVID three days before the race. Last year the tradition continued as a virtual event. But come March 13, more than 13,000 runners and walkers will be adorned in green for the 44th Shamrock Run Portland.

One of the draws to the event is that there’s a distance for everyone. There’s a 5K, 8K, 15K, half-marathon and four-mile walk along the Willamette River. For the kids there’s the Doernbecher Leprechaun Lap 1K run.

“Our event is focused on and does a good job of bringing in runners of all skill levels,” said Waldman, who returns to the event after managing operations alongside the Hamilton Family in 2018. “For some, it’s an introduction to how fun these events can be. For others, it’s a milestone, something you have to run.”

All the runs offer scenic views of the heart of the city, taking in parks and bridges. Those who step up to the 15K and half marathon will experience one of running’s iconic climbs on Terwillger Boulevard.

“It’s a buster of a climb,” said Pressler. “Every professional, national-class and definitely some world-class runners who have come through Portland have experienced that climb. It’s a thread that connects generations of athletes in Portland.”

Race weekend kicks off with a two-day Health and Fitness Lifestyle Expo where runners not only can pick up their bib numbers and official Shamrock merchandise, but also sample the latest in nutrition and wellness from a variety of sports and fitness-related partners.

Of course, what’s a running event without a party? The post-race festival features the Widmer Brothers Brewing Beer Garden where runners 21 and older receive a complimentary beer and the opportunity to sample or purchase White Claw Hard Seltzer.

If you’re hungry you can get a bowl of Shamrock Oatmeal, presented by Bob’s Red Mill.

Each runner receives a commemorative medal. The Leprechaun Lap participants will take home a superhero cape.

The primary beneficiary of the event is Doernbecher Children’s Hospital Foundation, which has been affiliated with Shamrock for the past 24 years, raising more than $550,000 for one of America’s leading pediatric health centers.

Bottom line, if you like running, like beer, having a good time and like beautiful views of a city with charm and character, then Shamrock Run Portland is the place to be on March 13.

“Shamrock Run showcases what Portland really is,” said Pressler. “It’s an amazingly tight community. Our greenery, our architecture, our topography. It showcases the best of Portland.”

For more information or to register for the return of Portland’s premier running event, please visit ShamrockRunPortland.com and follow @ShamrockPDX on social media.

About Shamrock Run Portland
Founded in 1979, the Shamrock Run Portland is the largest running and walking event in Oregon and will celebrate the 44th edition on Sunday, March 13, 2022. The Shamrock Run offers competitive races at a variety of distances from 5k to a half-marathon, as well as the “Shamrock Stride” fitness walk and “Doernbecher Leprechaun Lap” kids race. The weekend culminates with a finish line festival at Waterfront Park, including the Widmer Brothers Brewing beer garden and an entertainment stage with performances from local musicians.

Race weekend kicks-off with the Shamrock Run Fitness Fair at the Oregon Convention Center on March 11 and 12 where participants pick up their race number. The Fitness Fair features more than 80 exhibitors, celebrities, mascots, contests and give-a-ways. The primary beneficiary of the event is Doernbecher Children’s Hospital Foundation, which has been affiliated with Shamrock for the past 24 years, raising more than $550,000 for one of America’s leading pediatric health centers. For more information or to register, visit ShamrockRunPortland.com  or follow @ShamrockPDX on social media.