Serrieres wins third in a week at XTERRA Belgium 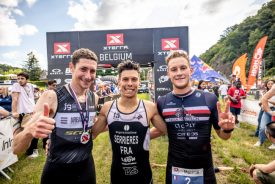 It’s Serrieres’ 12th XTERRA win in 13 starts since September 2020, the lone blemish being a runner-up showing to Hayden Wilde at XTERRA Worlds in Maui last December.

/ENDURANCE SPORTSWIRE/ – Arthur Serrieres and Marta Menditto captured the sixth annual XTERRA Belgium off-road triathlon elite titles at the Port of Beez in Namur on Saturday, June 11, 2022, with winning times of 2:27:22 and 2:55:05, respectively.

The race combined a 1.5km swim in the La Meuse River with a 36km mountain bike and 10km trail run along the Marche-Les-Dames cliffs.

In the men’s elite race Brian Tetard (FRA) was first out of the water in 19:07 with Maxim Chane (FRA) on his heels and Serrieres 45-seconds back.

Once on the bike, Chane rode up front by himself and took a 1:25 lead into the run but it was not enough as Serrieres proved once again to be the faster runner on tour with a 35:39 10km split to take the tape more than two minutes ahead of Chane.

The win was Serrieres’ third this week following his victory at XTERRA Lake Garda last Saturday and his big win at the World Cross Triathlon Championships in Romania on Wednesday.

“It’s always a pleasure to cross the line first, and today I proved to myself that I can perform well even if I’m not at my best,” said Serrieres. “I was tired from the week, but used my experience to manage my pace and come into T2 without too big of a gap to Maxim and played my game on the run. The atmosphere here in Belgium was really great with everyone cheering and the nice weather. The organizers do great work here.”

It’s Serrieres’ 12th XTERRA win in 13 starts since September 2020, the lone blemish being a runner-up showing to Hayden Wilde at XTERRA Worlds in Maui last December.

“I saw today that Hayden won the WTCS race in Leeds so I know he will be strong again but I look forward to battling with the big guys like him later this year,” said Serrieres.

For Chane, the race went according to plan but Serrieres speed on the run was too much to overcome.

“I tried to race for first, pushed really hard on the bike, and tried to push on the run but Arthur is just too fast,” said Chane. “One of these days at a race with a no-wetsuit swim and a really hard bike, if I race smart, I’ll have a chance to beat him.”

Sebastien Carabin (BEL) posted the days’ fastest bike split (1:28:25) to chip away at a four-minute deficit after the swim to finish in third to the delight of his home country family and friends.

In the women’s elite race Daisy Davies (GBR) was impressive in her first-ever XTERRA. She was first out of the water in 19:42, then rode up front the entire bike and took a 1:25 lead into the run.

“That was good fun, I really enjoyed it and look forward to having a crack at another one,” said the road triathlon standout. “I grew up mountain biking, so even though I haven’t done too much off-road riding recently as my focus is on the ITU style short course circuit I still felt comfortable out there.”

Menditto was nearly four minutes behind Davies after the swim but closed the gap on the bike and then stormed the run with the day’s best 43:26 split to capture the win with three minutes to spare.

“What a week, this is incredible,” said Menditto, who won the u23 World Cross Triathlon Championship on Wednesday in Romania.“I didn’t feel real good in the beginning. I was tired and swimming against the current in the river was hard. I didn’t feel too good on the bike either but then on the first loop on the run I felt great and was able to carry that through the finish.”

Carina Wasle (AUT) was strong all around and caught Jacqui Allen (GBR) on the run to take the third spot.

“I was tired from Romania just like Marta, and really had nothing in my legs on the bike,” said Wasle, who placed 3rd in the World Cross Duathlon Championships on Monday. “Luckily, on the run I felt good and was able to push, and it feels good to be up here with the top girls again. The conditions were beautiful today, nice and sunny and dry. It’s really nice here, and to be so close to the city is cool.”

XTERRA Belgium was the fourth of 10 majors on the 2022 XTERRA European Tour.