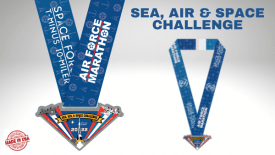 ELIZABETH CITY, NC | WRIGHT-PATTERSON AFB, OH (January 10, 2022) /ENDURANCE SPORTSWIRE/ – In honor and celebration of the collaborative efforts of the branches of the U.S. Armed Forces, the 2022 Coast Guard Marathon, Air Force Marathon and Space Force T-Minus 10-Miler have launched a first-of-its-kind, cross-race challenge for their 2022 events. Created by the teams behind the inaugural in-person Coast Guard Marathon and the well-known Air Force Marathon, the epic SEA, AIR & SPACE Challenge offers runners the chance to earn a limited-edition medal featuring aircraft used by each military branch. Participants can receive this medal by completing any distance race offered in person, virtually or a combination of the two at each of the three race events.

“We are beyond thrilled to work with our friends at the Coast Guard Marathon on this new challenge event. There is strength in collaboration and the sum is always greater than its parts, and that is never truer than when it comes to our U.S. Armed Forces working together,” said Brandon Hough, race director of the Air Force Marathon and Space Force T-Minus 10-Miler.

The Coast Guard Marathon will take place March 3-5, 2022 in Elizabeth City, N.C. and will include a race expo, full marathon, half marathon, 5K race, Semper Paratus Challenge and post-race celebration. It will be the military branch’s first in person race following its launch as a virtual event in 2021. The race is a Boston Marathon qualifier and is set to be among the flattest marathon courses in the U.S. this year. The Coast Guard Marathon is represented on the challenge medal with a C-130, a massive aircraft used to transport heavy cargo. As one of the largest Coast Guard air stations in the U.S., Base Elizabeth City is considered the home of the aircraft.

Set to take place, Sept. 15-17, 2022, the 26th annual Air Force Marathon will be held at Wright-Patterson Air Force Base in Dayton, Ohio. First held in 1997 to commemorate the 50th anniversary of the founding of the U.S. Air Force, the race has grown to welcome more than 13,500 participants from all fifty states and several countries. The 2022 race weekend will have five distance races including a marathon, half marathon, 10K, 5K, Tailwind Trot 1K Kids’ Run, as well as a three-person marathon relay and two Fly! Fight! Win! Challenge Series. The marathon course is a Boston Marathon qualifier packed with historic aviation sites. The Air Force Marathon is represented on the challenge medal with an AC-130J Ghostrider, a highly advanced aircraft used for close air support, air interdiction and armed reconnaissance.

An endurance event held at Cape Canaveral Space Force Station in Florida, the Space Force T-Minus 10-Miler will take place Dec. 10, 2022. This inaugural event celebrates the third anniversary of the branch focused on global space operations and features a 10 mile race, health and fitness expo and finish line festival. With warm December weather and a flat terrain, the course offers a great opportunity to set a personal best or train for longer events. The Space Force T-Minus 10-Miler is represented on the challenge medal with a RTV-G-4 Bumper Rocket, a sounding rocket used to study launch techniques. The seventh launch of the RTV-G-4 Bumper Rocket was the first rocket launched from Cape Canaveral in July 1950. Registration for this event opens on May 4, 2022.

Participants can register for the SEA, AIR & SPACE Challenge by visiting https://bit.ly/3JTdPM2 . Runners must also separately register for and participate in one race of any length at the Coast Guard Marathon, Air Force Marathon and Space Force T-Minus 10-Miler. Virtual options are available for all races. Challenge medals will be shipped upon completion of all three of the 2022 events.