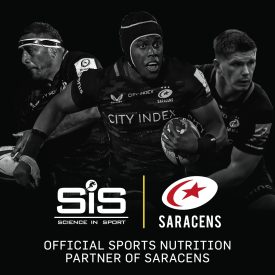 Leading global endurance nutrition brand Science in Sport (SiS) have announced that they are partnering with Saracens’ Rugby Club, and have been providing the team with extensive nutritional support for their training and competition since the start of the season

25th January 2023 – London UK /ENDURANCE SPORTSWIRE/ – English professional rugby union club, Saracens’ are widely recognised as ‘giants’ of English rugby, and sit proudly as one of the most successful British rugby union teams in history. Their talented team have enjoyed a highly successful first few months of the 2022/23 season, and have been competing at the very top of the Premiership Rugby league, the highest tier competition in English rugby.

This exciting new three-year agreement will see the team at Science in Sport support the Saracens’ team with a full nutritional strategy and access to bespoke product provision, to ensure that they are able to perform and recover at the highest level. Since the start of the season the team at Science in Sport have provided the team with product support, which has helped to fuel the successes of the men’s team, who are currently in the middle of their Gallagher Premiership and Heineken Champions Cup campaigns.

Ben Spencer, Saracens’ Rugby Club, Performance Nutritionist is delighted to be working with Science in Sport, and he says, “Saracens’ are committed to providing the best performance nutrition service to our athletes and having a nutrition partner that shares this ambition helps support performance both on game day and during training. Our partnership with Science in Sport provides a great opportunity for innovation and development around rugby specific performance nutrition and we look forward to the next three years of support.”

Sam Driver, Global Head of Elites at Science in Sport is very much looking forward to joining the Saracens’ family, and he says, “We’re delighted to partner with Saracens’ for the next three years and beyond. It’s clear to us the organisation is committed to performance at the highest level and this includes their approach to performance nutrition”.

Sam continues by saying, “We’ll be working with the performance team to improve all areas of nutrition support including across the core pillars of fuelling and recovery. The Science in Sport team will be

crafting and creating bespoke supplements to support the team’s efforts and ensure they are primed to compete for the major honours, this season and beyond”.

To learn more about Science in Sport Plc, visit www.sisplc.com and to shop their extensive range, visit www.scienceinsport.com.

And for more information about the Saracens Rugby Club, visit www.saracens.com.

About Science in Sport

Science in Sport plc, headquartered in London, is a leading sports nutrition business that develops, manufactures and markets innovative nutrition products for professional athletes, sports and fitness enthusiasts and the gym lifestyle community.

SiS, founded in 1992, has a core range comprising gels, powders and bars focused on nutrition and recovery and launched the world’s first isotonic energy gel.

SiS is an official partner to New York Road Runners, and the official gel partner of the TCS New York City Marathon.

Established in 1876, with 146 years of history, Saracens are London’s Premier Rugby Club.

From humble beginnings, Sarries have developed in to one of world rugby’s most respected, renowned and recognisable teams.

With the squad featuring some of the biggest names in the sport including Maro Itoje and England Captain Owen Farrell, Saracens Men are enjoying a period of unbridled success.

Over the last decade the North Londoners have won five Premiership titles as well as three European Championship Cup trophies.

Saracens Women have also followed suit, winning the Premiership three times. Like the men, they also feature a whole host of internationals, including Poppy Cleall and Marlie Packer.

In 2019 they formed a partnership with the Mavericks. With two Netball Super League titles to their name they will be looking to return to the top.

Off the pitch Saracens run an award-winning community programme. The Saracens Sport Foundation continues to engage with local communities, with the latest report confirming that they have impacted over one million people’s lives during that time.

StoneX Stadium has revolutionised since the opening of the West Stand, with the club determined to make it the best place to watch rugby in the United Kingdom.

Eight things we learned about sports sponsorship and marketing in 2022