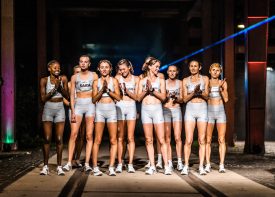 WALTHAM, MA (September 23, 2021) /ENDURANCE SPORTSWIRE/– Yesterday in the Zollverein Coal Mine Industrial Complex in Essen, Germany, Saucony athletes took off into the night on an unconventional race in the new Saucony Endorphin Pro+. While an impressive, yet technical course that ran through the unique UNESCO World Heritage Site tested the competitors, the Endorphin Pro+ proved itself on the course by helping break a world record and multiple athletes ran away with personal bests.

On the men’s side, Otto Kingstedt (SWE) broke his own 10km World Record for deaf or hard-of-hearing athletes, running a time of 29:56 and beating his previous record which stood at 30:06. Additionally, Tom Erling Kårbø (NOR) beat his personal record by 8.8% and Helen Schlachtenhaufen (USA) broke her own record by 2.95%. In the women’s race, Grayson Muphy (USA) took first place with a time of 32:54, beating Katie Holt (UK) who finished second, and Malindi Elmore (CA), fresh off the Tokyo Olympics, was third. On the men’s side, Jared Ward (USA) out-paced Samuel Fitwi (GER) in the final lap to finish first with a time of 28:58, with Dougie Musson (UK) finishing third.

Once one of the largest coal mines from the end of the 19th century to the early 20th century, the site is a symbol of evolutionary transformation. Set on a 1.2km loop directly on the grounds of the coal mine, the race served as the official launch of the Endorphin Pro+, Saucony’s fastest carbon-plated shoe. Engineered with the input from many of the 10km athletes at the event, the Endorphin Pro+ is the latest iterative advancement in the brand’s award-winning Endorphin Collection and features SPEEDROLL ™ technology with a carbon-fiber plate and PWRRUN PB ™ superfoam.

“I’m still fired up after seeing the athletes push themselves to the limits under the lights last night,” said Anne Cavassa, Saucony Brand President. “Watching so many athletes walk away with a new 10km record on a challenging course validates the countless hours we’ve spent working to make a shoe that’s lighter and faster than anything we’ve engineered before. Many of the athletes who competed last night helped us test and retest the shoe to get it exactly right. We obsessed over every stitch and ounce to cut weight without sacrificing performance and the results speak for themselves. We can’t wait to get these in more hands starting Tuesday.”

Following the strict COVID-19 protocols, Saucony athletes and attendees were still able to gather safely at the event to celebrate and run together in the exceptional shoe.

About Saucony: Saucony, a division of Wolverine World Wide, Inc. (NYSE: WWW), is a leading global running lifestyle brand that fuses performance, innovation and style to create compelling footwear and apparel with its widely recognized brands Saucony and Saucony Originals. Founded in 1898, Saucony exists to empower the human spirit, with every stride, on every run, in every community. The brand’s call to action, Run for Good, is Saucony’s invitation to people everywhere to experience the transformative power of running. Saucony’s award-winning innovations include PWRRUN™ PB, PWRRUN+™, and FORMFIT™. At Saucony, a good day is when we run. A better day is when we inspire others to run. For more information, go to www.saucony.com.

About Zollverein: Zollverein was the world’s largest and most modern coal-mining facility and a leading example of the development of heavy industry in Europe. At its peak, 8,000 miners worked day and night in the mines and the buildings above ground. Coal was mined and processed at the mine for 135 years, before the mine was decommissioned in 1986. Today, with its Bauhaus-influenced design, the mine is a triumph of modern industrial architecture and a center for art and culture.

View all Releases by Backbone Media