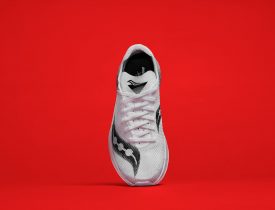 Brand’s fastest carbon-plated shoe will be showcased by world-class athletes during a 10K race at a UNESCO World Heritage Site, a former German coal mine and one of the most impressive industrial monuments on the planet

WALTHAM, MA (September 14, 2021) – Today, global performance running lifestyle brand Saucony announces that fast just got faster with the launch of the Endorphin Pro+, the latest iterative advancement in the brand’s award-winning Endorphin Collection. Now with a reengineered ultra-light upper, Saucony’s fastest carbon-plated shoe will be unveiled by world class athletes during a 10K race under the lights on September 22 at the Zollverein Coal Mine Industrial Complex in Essen, Germany, a UNESCO World Heritage Site and considered one of the most impressive industrial monuments on the planet. Like a concept car, the purposefully limited production of the Endorphin Pro+ means this one is here for a fast time, not a long time. Beginning September 28, the Pro+ will be available at saucony.com and select running specialty retailers globally. Images of the Endorphin Pro+ can be found here.

Tailored for speed and engineered with Saucony’s elite runners, the Endorphin Pro+ is built on the same propulsive engine as the Endorphin Pro 2, fueled by SPEEDROLL™ Technology with a carbon-fiber plate and PWRRUN PB™ superfoam. Taking cues from the ultralight, minimalist world of track spikes, the all-new upper is a luxurious, road-ready edit with premium suede, enhanced breathability and a second-skin fit. With a lighter weight mesh, reduced tongue complexity and printed detailing, the Endorphin Pro+ weighs in .6 ounces lighter than the Endorphin Pro 2.

“At Saucony, we are at our best when we listen to runners and when we are relentlessly innovating,” said Shawn Hoy, Saucony’s senior vice president of global product and innovation. “Our elite runners told us that they believed that we could make the Endorphin Pro lighter and faster. They wanted to go faster and wanted us to help them. The Endorphin Pro+ delivers even more speed with a more minimal upper that shaves grams off the weight so runners can shave seconds off their time. And what better way to share the Endorphin Pro+ than with a fun event with a group of awesome runners at a truly great venue. We trust that everyone will enjoy the event as much as we enjoyed creating the shoe.”

Once one of the largest coal mines from the end of the 19th century to the early 20th century, the materials of the UNESCO World Heritage Site Zollverein were an invaluable resource that helped shape technological improvements. While the coal mine is no longer functional, it serves as a symbol of evolutionary transformation. Incorporating the innovative approach of architects over the years, the structure has transformed into a showcase for conservation through art, architecture, and design. Viewers will be able to watch elite runners push their personal limits at the unique event via a livestream, which will be available for viewing here.

About Saucony: Saucony, a division of Wolverine World Wide, Inc. (NYSE: WWW), is a leading global running lifestyle brand that fuses performance, innovation and style to create compelling footwear and apparel with its widely recognized brands Saucony and Saucony Originals. Founded in 1898, Saucony exists to empower the human spirit, with every stride, on every run, in every community. The brand’s call to action, Run for Good, is Saucony’s invitation to people everywhere to experience the transformative power of running. Saucony’s award-winning innovations include PWRRUN™ PB, PWRRUN+™, and FORMFIT™. At Saucony, a good day is when we run. A better day is when we inspire others to run. For more information, go to www.saucony.com.

About Zollverein: Zollverein was the world’s largest and most modern coal-mining facility and a leading example of the development of heavy industry in Europe. At its peak, 8,000 miners worked day and night in the mines and the buildings above ground. Coal was mined and processed at the mine for 135 years, before the mine was decommissioned in 1986. Today, with its Bauhaus-influenced design, the mine is a triumph of modern industrial architecture and a center for art and culture.

View all Releases by Backbone Media