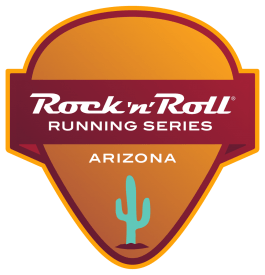 TEMPE, Ariz. (Jan. 17, 2021) /ENDURANCE SPORTSWIRE/ – The Rock ‘n’ Roll Running Series returned to the Valley of the Sun for the first time in two years, kicking off its 2022 calendar of events with the Rock ‘n’ Roll Running Series Arizona event. Participants were provided a one of a kind running tour through the red rocks of Papago Park, past murals from local artists, and down urban streets of three major cities, Phoenix, Scottsdale, and Tempe. Over 17,000 registered participants took to the streets lined with cheer squads, local bands and entertainment from start to finish.

The excitement continued Sunday with the marathon, half marathon, 10K all taking off from University Dr. & College Ave in Tempe, traversing the three cities before returning to Tempe Beach Park for the Finish Line Festival and Encore Entertainment.

In the marathon, Zachary Garner (Bettendorf, Iowa) was crowned the winner for the men clocking a time of 2:28:48. Dan Kasprowicz (Wayland, Ohio) was second with a time of 2:32:10 and Charlie Ware (Tucson, Ariz.) followed in third place finishing in 2:35:49. Kai Sharbono (Spokane, Wash.) was the women’s winner with a final time of 2:55:01 with Sara Polatas (Findlay, Ohio) followed in second with a finishing time of 3:03:14 and Corey Petersen (Glendale, Ariz.)rounded out the podium with a time of 3:07:12.

In the half marathon, it was a Chris Frias (Ventura, Calif.) taking top spot clocking a time of 1:07:43. Bryant Byrd (Gunnison, Colo.) was second with a time of 1:08:01 and Austin Lavin (Glendale, Ariz.) followed in third place finishing 1:08:06. Stephanie Bruce (Flagstaff, Ariz.) was the women’s champion with a final time of 1:10:33 with Rosie Edwards (Scottsdale, Ariz. Originally from Great Britain) behind finishing in second with a finishing time of 1:16:39 and Amanda Millar (Paradise Valley, Arizona) rounding out the podium in 1:18:26.

Elite runners and fast times aside, the weekend’s events were all about the party atmosphere. Several local bands, including Come Back Buddy, Sky Daddy & The Pop Rocks, Cesar Chavez High School, DJ Munition, The Noisemakers and The Phoenician Four among many other talented artists from the Arizona community performed live on band stages along the route interspersed with cheerleaders and crowd support. The party wasn’t only on course – Phoenix based cover band Rock Lobster and country rock band Mogollon closed out the show as the Encore Entertainment.

Rock ‘n’ Roll Running Series has developed a series of comprehensive Safe Return to Racing operating principles prepared in accordance with industry standards for open air participation sporting events including standards from World Health Organization (WHO) and guidance from the IRONMAN Group Global Medical Advisory Board. These Ready to Rock: Safe Return to Running Guidelines empower everyone involved to focus on a safe return to running. With attention to density reduction, touchpoint minimization, enhanced hygiene, screening, and education, as well as self-awareness, the Rock ‘n’ Roll Running Series will continue to deliver a rockin’ participant experience with necessary adjustments so that the participants can race safely, race smart, and race their best.