Runners celebrate return of Surf City Marathon and Half Marathon 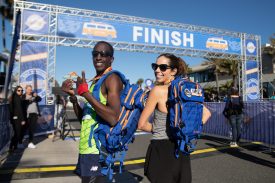 HUNTINGTON BEACH, CALIFORNIA – February 7, 2022 /ENDURANCE SPORTSWIRE/ – Winter storm Landon dumped hundreds of inches of snow throughout the Midwest this week, along with burying the Southeastern United States in ice.

As for the more than 11,000 runners from 47 states and 14 countries who participated in the 26th annual Surf City Marathon and Half Marathon this weekend in Huntington Beach, they couldn’t relate. Making sure to lather up in sunscreen was their biggest worry.

With temperatures in the 60s, blue skies and palm trees lining the Pacific Coast Highway course, mother nature was the star Sunday morning.

“It was beautiful out there,” said women’s marathon winner Johanna Torgesen. “It was so cool to run down the highway, see the waves, just the gorgeous views throughout the whole race. It was really nice.”

Men’s half marathon winner Roosevelt Cook soaked up the ambiance as well.

“I was running with that old school VW bus (lead pace vehicle), having that out in front of the pack,” said Cook. “Just staring at that cool car, trying to get in a zone and looking around at the mountains, looking at the ocean, and it was easy to keep everything relaxed.”

The 33-year-old Torgesen grew up in Seattle and is a Navy pilot based in Coronado. Many of her training runs unfold on the Silver Strand in San Diego, so she’s accustomed to running surrounded by water and palm trees.

Torgesen loved flying as a child, was passionate about planes and pursued her passion.

“I stuck with it and never looked back,” she said.

Kind of like her attitude when she was leading late in the race.

“I tried not to think about being first place,” she said. “You never want to get too comfortable, don’t want to be too confident. But coming down the last mile, I just thought, ‘You’ve really got to push it.’ Once I could see that finish line, the adrenaline kicked in big time. It was pretty amazing.”

Mohr has completed six Ironman-distance races and qualified for Ironman World Championships in Kona, Hawaii twice. His goal was to crack 2:30. While he fell a bit short, he still ran nearly a 10-minute personal best while taking the lead from the start.

“I was kind of sitting at a 5:40 pace,” said Mohr, who used to live in New York and would come to Huntington Beach for the weather. He wasn’t disappointed with Sunday’s elements.

“The conditions were beautiful,” he said. “It was nice to start off with cool weather and then have the sun come out.”

Cook, 42, finished second in the masters event at the U.S. National Cross Country Championships in January. The seven-time Carlsbad 5000 age-group champion moved one spot up the podium Sunday, winning the half marathon in 1:10:24. John Carrell placed second in 1:10:43.

Cook finished third at the most recent Surf City Half Marathon in September. This time he ran 1 minute, 19 seconds faster to take home the win and gave props to one of his partners, Qure Water, which also sponsors the marathon.

Liz Camy was the best thing out there in the women’s half marathon. The Simi Valley runner won in 1:17:54.

“When there’s big crowds, it’s great to have those long stretches,” she added. “It’s long stretches of absolute beauty. There isn’t one part of this course that isn’t absolutely beautiful. I don’t think you could have asked for a better day.”

Huntington Beach’s Tiffany Costello, who underwent brain surgery last May in her battle against epilepsy, finished second in 1:20:39.

The race also featured dozens of runners with Team DetermiNation, who raised tens of thousands of dollars to support the American Cancer Society. Their fundraising efforts support programs that help to save lives, celebrate lives and lead the fight for a world without cancer.

About the Surf City Marathon

The Surf City Marathon and Half Marathon annually takes place the first Sunday in February attracting thousands of runners from around the world.  The scenic course gives runners an oceanfront tour of Huntington Beach with the start and finish line located just steps from the beach. A two-day Active Lifestyle Expo kicks off race weekend in Huntington Beach Parking Lot on Friday and Saturday. The free expo is open to the public featuring numerous vendors featuring the latest in running gear, nutrition and informational clinics. Race weekend features two days of running with a beach mile race on the sand on Saturday morning and the marathon, half-marathon and 5k on Sunday concluding with a finish line festival and beer garden. Further information about the Surf City Marathon can be found online at www.RunSurfCity.com.