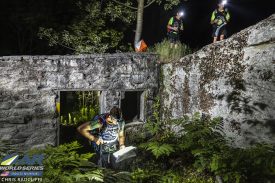 /ENDURANCE SPORTSWIRE/ – The 2022 Endless Mountains Adventure Race introduced the Adventure Racing World Series to the little known and underappreciated PA Wilds, the remote and rugged wilderness that makes up some of the most undeveloped land on the east coast of the United States. This inaugural edition was the first of five courses that Rootstock Racing’s Abby Perkiss and Brent Freedland have developed to spotlight different portions of the Wilds over the next decade.

As they gear up for the race’s second year, they reflect back on what made 2022 such a successful first event and what they are excited for in 2023.

2022 was widely seen as a highly successful race among the American adventure racing community. What made your event so successful?

Abby: I don’t know if we can take full credit for that. We have an amazing adventure racing community here on the east coast, and they really showed up. We were aware going in that most expedition races don’t have big fields for their first event; oftentimes, they never field more than 20 to 25 teams. We ended up with 32. We were grateful that so many local racers took a chance on us for our first multi-day race.

That said, I think we’ve developed a reputation in North America for designing events that are both accessible and rewarding for all levels of racers. We worked hard to create resources for folks looking to step up to multi-day racing for the first time, and we also aimed to design a course that challenged the top teams with technical navigation, a fair bit of strategy and route choice, and rugged terrain – and the PA Wilds is really the perfect setting for that. It may be more subtle than some AR venues, but I think everyone who came out in 2022 was surprised by what the land offered.

We were also fortunate that the local communities really embraced the race and helped us make it what it was. They offered us significant logistical support that allowed us to better invest our time and financial resources into the racer experience – and they also brought a ton of good cheer to race week.

I think all of that came together to make year one a success. We’re working hard to bring all that to bear for the 2023 edition.

Brent: Having competed in fifteen or so ARWS level events and followed many more, we know what makes a good expedition race. On the surface, Pennsylvania is not necessarily as glamorous as some of the destinations other ARWS events offer, but we also know that we have a hidden gem here in our state. The forests and waterways are beautiful, wildlife is abundant, the landscape is surprisingly technical and rugged, and then there is the navigation.

In over a decade of expedition-length racing, one thing we often notice is that navigation gets whittled down a bit in long races. There are sometimes interesting route choices, and mistakes still happen, but navigation tends to be relatively straightforward for most of the race, and checkpoints are often not that hard to find as they tend to be on major features like trail intersections, mountain tops, and so on.

For Endless, we work hard to engage navigators and their teams for as much of the race as possible. It’s not that every checkpoint is hard to find, but we are confident that Endless will challenge the best navigators more so than many races, while still remaining accessible to less experienced ones.

I remember Lars Bukkhave, who raced on the 2022 champion Bend Racing team, remarking toward the end of the race that he found the navigation to be “unrelenting” and how amazing that was to experience.

Abby: The PA Wilds region of the state is a vast one. It includes more than two million acres of lands, much of which is controlled by various public entities. For 2023, we are moving our race headquarters east to Williamsport, one of the biggest towns in the region.

We obviously can’t talk about the fine details of the course at this point, but teams will explore completely different land from last year, and can expect a different flavor to some of the course design. We won’t be using canoes, for example, and the packrafting will feel, hopefully, more enjoyable next year.

We are also really excited to be including a one-day division for 2023. We were unsure this would work, but a number of people said that they would love to take on a small portion of the event. So, we are running a thirty-hour event alongside the five-day. These teams will essentially race with the expedition race teams for the first day of the big race. Much of the course will be similar, though there will be some modifications to the “lite” version, as we’re calling it. This is a great opportunity for teams that either can’t fit Endless into their schedules, aren’t ready for an expedition race, or have their resources committed to a different expedition race.

Brent: We loved the 2022 course, but we are fairly confident this year’s will be better. There are some similarities in terms of style, but we like to work with what the land gives us, and we have some fun new challenges we are excited for the teams to take on.

What are some of those similarities?

Abby: First of all, we will work hard to make sure the race is accessible to the range of teams who come. Of course, folks will need a certain level of fitness to complete a five-day course, but there will be short-course options to offer the savvy, determined rookie teams a real chance of finishing the event officially. We design our course using a modified rogaine format, meaning there is a mandatory short-course route with optional points scattered along it to increase the physical and navigational challenge for the more experienced teams.

Even if some teams end up having to skip some of the mandatory checkpoints (as happened in 2022), we still officially rank all teams if they move from TA to TA unassisted. This format worked out exceptionally well last year with all but two teams finishing the race officially. One of those teams is one of the best adventure racing teams in North America and had to withdraw due to injury. The other lost a teammate early on day one due to illness, but the remaining three members completed the rest of the course.

And, in what was a bit of a happy accident, every finisher last year crossed the line within nine hours of each other, right up against the race clock. We had beer from Clarion River Brewing and the local school district hosted a cookout right at the finish. It really became this incredible community experience. We hope that there will be a bit more of a spread this year to allow a few more teams a chance to finish the full course, but we would also love to replicate the experience that so many teams had throughout the race of seeing and supporting one another.

Brent: Navigation will once again feature in the race. There are some amazing checkpoints out there on this course, places very few people know how to find.

As usual, the trekking will be especially challenging for teams that want to go for those optional CPs. Last year, we had a massive fifty-mile foot rogaine in the middle of the event. Short-course teams took on about half of it, but it was a huge section that really changed the race for so many teams in the top ten. Some of the top teams at the event found themselves pushed physically and navigationally in a way they did not expect. We can’t give away too much, and we aren’t necessarily looking to fully replicate that monster trek, but teams can expect some stunning treks full of challenging off-trail navigation in 2023. There might not be a fifty miler next year, but one or two treks…maybe three…will really mix things up again.

Packrafting will also be a highlight in 2023, and teams can expect easier paddling than the infamous 2022 packraft leg in the bony rapids of the West Branch Susquehanna. Due to some boat sourcing issues and the fact that water levels are so unpredictable through much of the summer in the PA Wilds, we are packrafting exclusively. But the water is unique and beautiful, and we are excited that our participants will be able to enjoy the rafting a bit more this year than they did in last year’s shallows.

Both of the packrafting sections for 2023 are sponsored by MRS Packrafting. Registered teams will receive a discount on all MRS boats. Rafts will also be available for rent for teams directly through Rootstock Racing, care of Packrafting Adventures.

Can you tell us anything else about year two?

Abby: There will be ropes! We have been working hard with some local guides to design a ropes section that will be relatively unique: a climbing relay, among other things. Individual racers will each have to complete at least one top-rope route at a pretty cool site, and teams will also have to find additional climbing checkpoints by scrambling, bouldering, and exploring this spot, unroped.

For teams that either really can’t prepare or do not want to climb, they will receive time penalties. The challenge is meant to be both fun and adventurous, and we don’t want it to make or break the race for a team that just isn’t up for that challenge or can’t complete it. We expect most teams to be able to handle the climbs we include (they will vary from 5.4/5.5 – 5.9), and we are excited to include proper rock climbing in a race.

Brent: I can’t say too much, but this year’s course is just gorgeous. Like last year, plenty of water, plenty of streams. But this year, I think the landscape is more striking, with a number of amazing waterfalls. Some are well known, but others really are off the beaten track. Teams will be exploring these kinds of features by foot, by bike, and by packraft.

In addition, we’re excited to include a proper mountain bike orienteering section next year. As we like to do, this will be embedded in a bigger stage of the race. You don’t always get much navigation on bike stages in big races, but this will be a nice change of pace that will add an interesting wrinkle in for the tired navigators.

Abby: The last thing I’ll add is that for teams outside of North America, we are committed to extending a discount toward the cost of entry. If anyone is interested in discussing that, just reach out to us directly through email or DM.